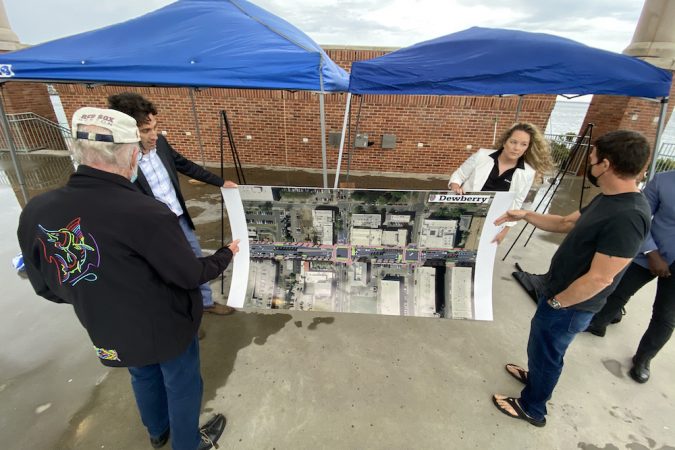 Public Gets a Look at Hashtag, Phase I

Weathering the wind and rain, overlooking the chop in Pensacola Bay as it began to dance with an incoming storm Wednesday night, people milled about the stage of the Community Maritime Park Amphitheater, getting a better understanding of the city of Pensacola’s so-called Hashtag project.

Laid out lengthwise across multiple tables, and blown up onto a large display, was an overhead view of downtown Pensacola’ streetscape, with planned improvements for a stretch of Main Street that are aimed at making the area more pedestrian-friendly and are part of a larger effort to improve connectivity and waterfront access.

David Forte, the city’s capital improvements projects manager, stands to the side of the stage, fielding questions and watching as people pour over the streetscape renderings from the Dewberry engineering firm.

“We’ve made them into aerials, so people like you and I who don’t look at a lot of blueprint plans can understand what we’re doing,” Forte said.

Be it blueprints or ariels, Forte has a pretty good idea of what he’s looking at. Along with improvements being planned for nearby Bruce Beach, he considers the Hashtag project to be one of the more important city infrastructure projects of the modern era.

“These are capital projects, probably in my entire lifetime, that will be more significant not just to downtown, but for Pensacola,” Forte stressed.

The Hashtag project is so named because the confluence of downtown streets involved roughly form the shape of the hashtag, or pound sign. Focused on creating a walkable, bikeable downtown with fluid connectivity that allows for public access to the city’s waterfront, the project has taken shape over the last couple of years over the course incorporating plenty of public input and guided by SCAPE, an urban planning firm from New York City.

The public input session Wednesday — held outdoors as a COVID safety measure — along with a virtual session Tuesday, was geared toward gathering input on phase one of the Hashtag project, which consists of improvement planned for Main Street, between South Alcaniz and South Baylen Street.

“We’re currently at what we’re calling a concept phase,” Forte said, explaining that the project is about 30 percent into the design phase, with final plans due this summer and construction beginning late 2021 or 2022.

The phase one components of the Hashtag project slated for Main Street include traffic calming elements, bike lanes, bioretention features and urban landscaping. And there’s a little more time —until April 23— for the public to let the city know if they think the project needs additions or revisions.

“I hope to get 500 emails over the next week and a half,” Forte laughed.

Standing under a large Blue Wahoos umbrella, Pensacola City Council President Jared Moore said he viewed the Main Street portion of the Hashtag project as part of a larger effort by the city to focus on “place-making,” or creating a unique, welcoming urban environment.

Under his umbrella, Mayor Grover Robinson agreed and said the project would also pave the way for downtown’s further evolution.

“This will allow growth to continue to happen,” Robinson said.

— For more on the city of Pensacola’s Hashtag project and the improvements slated for Main Street, check out next week’s Inweekly.

3 thoughts on “Wind, Rain and Walkability”