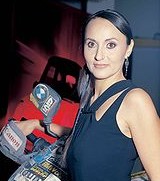 On June 19, 1997, Benka Pulko departed from her hometown of Ptuj, Slovenia on a BMW F650 motorcycle. She returned to Ptuj on December 10, 2002, having established the Guinness World Records for the longest solo motorcycle ride ever undertaken by a woman – in both distance, 111,856 miles (180,015 km), and duration, 2,000 days. In the process she also became the first motorcyclist to reach Antarctica, and the first woman to ride solo across Saudi Arabia.

On Thursday, Jan. 24 at 6 p.m., Pulko speak about her adventures at BMW Motorcycles of Pensacola, 6258 North W St. I had a chance to interview her.

Why travel around on the world on a motorcycle, instead of some other means of transportation?
Because it is small, agile and is not acting as a barrier, like most other vehicles are. The motorcycle means freedom. It is the method to enter into a new world completely, fully, without hesitation or a safety net. I chose BMW because I was much more interested in enjoying good times than in dealing with mechanical challenges and technical misadventures. If I were to repeat the journey, I wouldn’t change a thing.

What was the most difficult country to get permission to travel through? How did you overcome the difficulty?
Actually one doesn’t need permission to travel. Occasionally visas, but that is about it. Most countries don’t create problems for visitors, at least not decent countries with nothing to hide from the world. Throughout all 5.5 years of my trip, I only had difficulties three times.

Twice with China: trying to enter from both the East and West sides. They demanded the ridiculous sum of $20,000 for “administrative fees,” which I gladly refused to pay and keep traveling through the friendlier countries instead.

And Vietnam: despite the most expensive visa of them all on my travels, they refused me entry by explaining, “Your bike is too big for us. One who has a stronger engine than our police can not enter the country.” Funny situations and strange explanations are everyday occurrences when traveling the world.

What city that you visited was the biggest surprise? How so?
Each of them has something surprising to offer: Bangkok has scorpions, butterfly larvae and grasshopper on the menu; Tokyo with its coffin-like accommodation; all Indian cities for their horrendous traffic; DeLand, Florida for the best skydiving on the planet; … The world is full of surprises. It has never made sense to be shy about approaching them.

What are three life lessons learned from your travel around the world?
Huh, only three out of the entire book?! OK, I can try. First, you do not need to possess anything to be able to have everything. Second, the biggest strength is the ability to admit your weakness. And third, the Universe is an unmistakably balanced system: you always get what you give. Always.

What is your message to women in Pensacola?
In my opinion women do not need any special instructions about life in comparison to men, so my message would be the same for all, no matter their gender, race, religion or age: Live life to the fullest and allow yourself to experience the unknown. It helps a lot if one can see obstacles as challenges, rather than troubles.