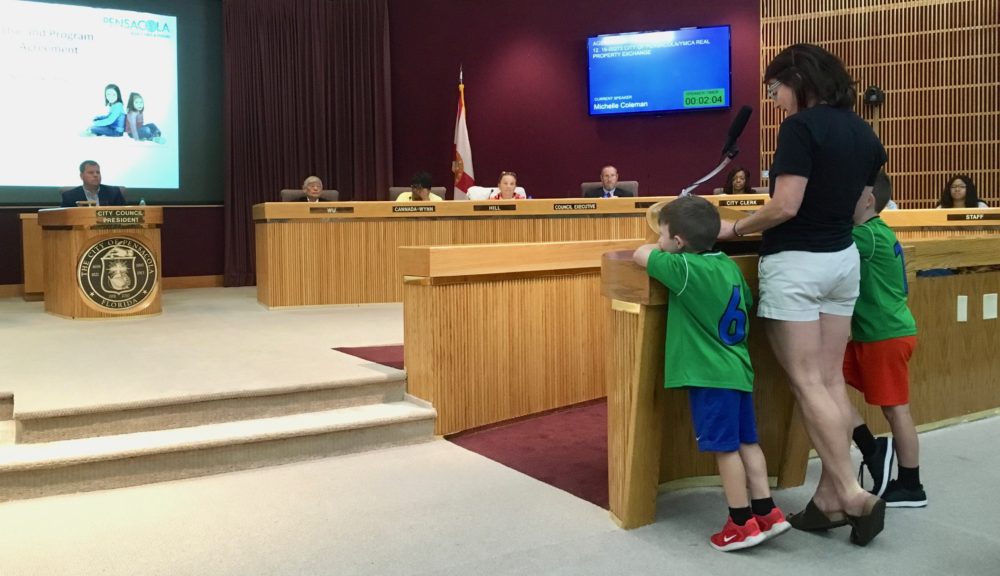 Changes are afoot across northeast Pensacola’s recreational landscape. The city of Pensacola is moving ahead with a proposed soccer complex off of Langley Avenue, while the YMCA of Northeast Pensacola will be moving its operations to the city’s community center and athletic complex on Summit Boulevard.

The recreational shifts are aspects of a land-and-services swap between the city and the YMCA. The deal — months in the making — was approved Thursday night by the Pensacola City Council following hours of public discussion.

Referencing the recent 13-0 record-breaking game the U.S. women’s team just experienced in a 2019 Women’s World Cup match, Pensacola Mayor Grover Robinson said players in the city’s growing youth league — some of whom were in attendance — deserved quality fields to compete on.

“With what’s happing with women’s soccer, who knows if one of these ladies here might play and represent the United States at the highest level,” Robinson said.

Pensacola’s youth soccer league has been growing exponentially in recent years, long since outgrowing the collection of fields at the Roger Scott Athletic Complex off of Summit, where it currently shares space with baseball and football leagues. The city’s deal with the Y will allow for the construction of a dedicated three-field complex off of Langley; the complex will utilize an already existing field space in Hitzman Park, as well as the Y’s adjoining property.

The YMCA, in turn, will be relocating to the Vickery Community Center off of Summit, where it will lease space to operate its programs. The organization will eventually construct a new facility on a half-acre parcel of land next door to the community center.

Also as part of the deal, the YMCA will be shedding some of its current offerings — such as its sports leagues — and absorb the city’s existing after-school program into its own. Such moves are designed to avoid overlap between the two entities, though there were concerns raised during Thursday’s meeting about the change effectively limiting options for area families, as well as how it would impact the community’s use of the Vickery Center.

This land-and-services swap with the YMCA has been one of the more contentious issues that Mayor Robinson has faced since coming into office last fall, at which point the deal was already in motion. For months, his administration has faced objection to the deal from residents of the Scenic Heights neighborhood that fear the new soccer complex will negatively impact the area, and more recently from people who felt the deal favored the Y too heavily.

Those concerns were voiced again during Thursday’s council meeting, with neighborhood residents requesting that council hold off — “just a pause” — on any decision.

Council members, too, had some concerns, mainly with the timing of some late-in-the-game aspects of the deal which they had been made aware of earlier in the day.

“I think we’re getting a lot of things at the last minute,” said Councilwoman Ann Hill.

The last-minute details included an additional $750,000-ask the mayor will be including in his forthcoming budget proposal. Council was told the extra money, coming out of the city’s LOST funds, would be needed, in part, to satisfy some concerns from the surrounding neighborhood on Langley, such as the construction of a sound-barrier berm between the soccer complex and houses backing up to the fields.

Councilwoman Sherri Myers also raised concerns related to the city’s original conveyance of the YMCA’s property off of Langley. They city sold the Y the 5-acre property in 1971 and the councilwoman wanted to know if perhaps the sale included a clause that stipulated the property would revert back to city ownership if the Y pulled up stakes.

“I think that this is significant and I don’t think there should be any rush,” Myers said, suggesting council shelve the matter until the specifics of the 1971 deal could be studied.

Assistant City Attorney Rusty Wells said that the 1971 deal was clean: “The deed does say the conveyance is forever, there’s not a reverter in it.”

Ultimately, council would approve the deal with the Y on a 4-2 vote, with Myers and Hill voting against the measure. Councilman Gerald Wingate was absent for the vote.

It’s a move that proponents of the soccer complex, some of whom spoke during Thursday’s meeting, say is needed in order for youth soccer’s continued growth in the area. One parent of two young soccer players said the league deserved better than the “scraps of grass and dirt” that are currently used, while another described it as an “incredible opportunity” and said the city was “on the cusp, hopefully, of really growing something for our kids.”

“I think it’s something we need for the 1,200 kids who are playing,” Morgan said.