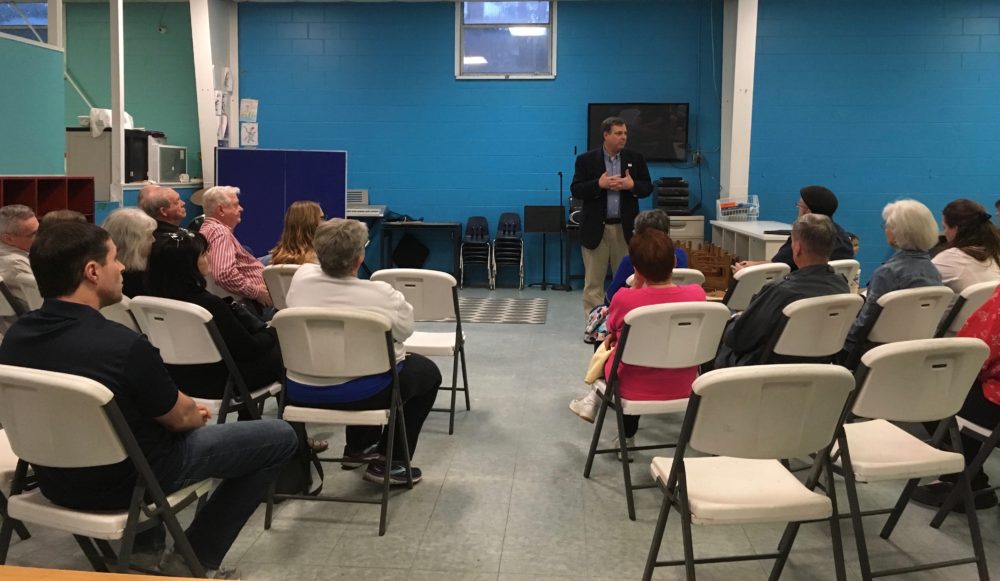 There was little talk Monday night of the city of Pensacola’s youth soccer complex proposed for property currently home to the YMCA on Langley Avenue. Residents attending a Q&A session with Northwest Florida YMCA CEO Michael Bodenhausen were more focused on the possible loss of a neighborhood asset.

“We don’t want you to leave,” one man told Bodenhausen.

The YMCA is currently engaged in talks with the city regarding a possible land-and-services swap, which would see the city acquire the Y’s property neighboring Hitzman Park on Langley in order to construct a soccer complex, and see the Y move to another location, possibly the city’s Vickery Center, where it would reshuffle the services it offers in an effort to reduce duplication with city services.

Residents of the Scenic Heights neighborhood have expressed concerns about both the construction of a soccer complex, as well as the loss of the Y. Monday night, Bodenhausen hosted a forum at the Langley location to field questions about the potential deal.

Just as he had done last week during a city meeting, the CEO stressed that the YMCA was likely moving from the area regardless of any deal with the city. The Langley Avenue facility, he said, was outdated and did not allow for needed expansions.

“The community demands more, wants more,” Bodenhausen said. “We want to provide that.”

Bodenhausen pointed to the downtown YMCA’s recent revitalization following a move that resulted in a much-updated facility.

The Y official explained that if a deal was struck with the city, it would entail the organization dropping some of its duplicative services, such as some youth sports offerings. He cited market research that indicated citizens preferred the Y work in tandem with the city.

Addressing a concern voiced during a previous community meeting, Bodenhausen said that either the city would begin offering soccer for younger players, starting at 4-years-old, or the Y — which currently has 70 younger players enrolled — would continue to offer it: “It’s not going to go away.”

The CEO also said that the Y would not proceed with any deal that jeopardized either its  after-school or daycare services, citing the services as the organization’s primary mission.

“We will not move if we cannot take care of every child that needs help,” he said.

Further, the CEO committed to providing transportation to students from nearby Scenic Heights Elementary School that participate in the Y’s after-school program. Currently, 48 students from the school are enrolled.

“We’re not leaving kids behind,” he said.

Bodenhausen also discussed the YMCA’s potential deal with the city. He noted that in addition to relocating to the Vickery Center near Roger Scott Athletic Complex, the city had also suggested four other sites for consideration; the CEO declined to elaborate further.

Attendees suggested a number of alternatives to relocating, most centering on expansions and improvements at the facility. Bodenhausen didn’t appear optimistic about such prospects, pointing to the market research-driven decision to relocate and the impracticalities of addressing issues at the current site.

“We have to look at the market study and what the community wants,” he said, explaining flatly that, one way or the other, the YMCA was looking to leave its Langley property. “If the city is not interested, it would be sold.”