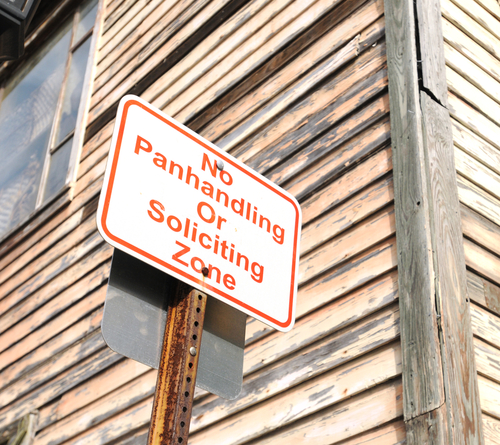 Last night, the Pensacola City Council  voted to repeal an ordinance–sponsored by Mayor Ashton Hayward and Council President Brian Spencer and passed in April–that prohibited individuals from asking for donations in downtown Pensacola. The vote was 5-0. Mayor Hayward and President Spencer didn’t attend the meeting.

The ACLU of Florida filed a lawsuit challenging the ordinance prior to its going into effect, arguing that the law violates the free speech and due process rights of those impacted by the law.

“We warned the city that we would sue if they attempted to implement this unconstitutional ordinance, they did it anyway, we sued – and now, thankfully, they’re backing down.

“Cities shouldn’t use law enforcement as a tool to address homelessness and poverty, and courts across the country have made clear that they can’t ban certain kinds of speech, like panhandling, simply because they might make some people uncomfortable.

“We had worked to avoid litigation in this case, and now that this ordinance no longer poses a threat to the people of Pensacola, we will immediately work to end that case.

“We are glad that the city council has walked back this wrong-headed ordinance, and we hope that this serves as an object lesson for other Florida cities about the fact that the Constitution protects everyone – including those who are least fortunate in our communities.”

The ordinance had originally been proposed by the Downtown Improvement Board and was drafted by City Attorney Lysia Bowling who assured the council that it would stand up to court challenges. Mayor Hayward told the council members and others supporting the ban that he would fight for it in court, which is why the council approved the ordinance. Read “Pensacola’s Panhandling Dilemma” to understand Mayor Hayward’s six-year battle concerning the homeless and panhandling.

The ACLU of Florida announced it will file a motion to dismiss is lawsuit since the ordinance has been appealed.More information about the lawsuit filed in May is available here.

1 thought on “ACLU to City of Pensacola: We told you so”