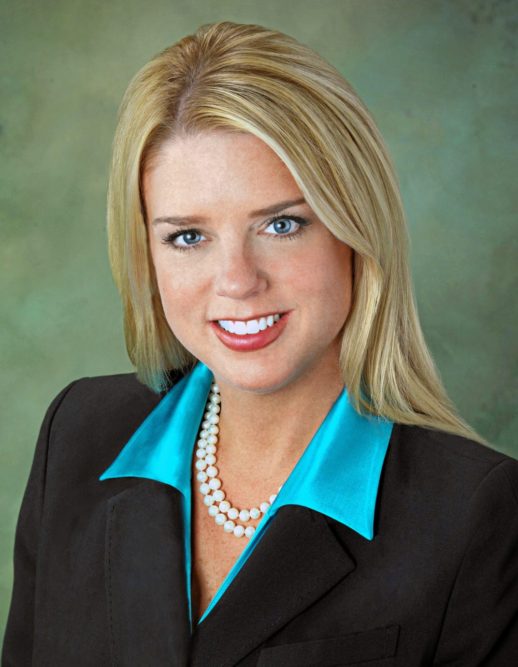 Florida Attorney General Pam Bondi, who was one of the highest-profile Republicans in the state to endorse Donald Trump before his primary win in the state, is now catching heat for her ties to the presumptive GOP presidential nominee.

The most tangible furor facing Bondi concerns an Associated Press report about a donation she received from Trump “around the same time” her office was considering joining an investigation against the businessman’s namesake university. Bondi eventually decided not to join the case against Trump’s venture.

Marc Reichelderfer, a political consultant for Bondi when she ran for re-election, told the AP that Bondi personally solicited the contribution in 2013.

“The process took at least several weeks, from the time they spoke to the time they received the contribution,” Reichelderfer said.

And Justice for All, a group that supported Bondi’s re-election, tried to return the $25,000 contribution to the Trump Foundation because the money came from a charity, but the organization refused to accept the refund and said Trump had reimbursed it from his personal wealth, the AP also reported. Charities are prohibited from contributing to political campaigns.

Florida Democrats hammered away at Bondi over the disclosure.

Sen. Dwight Bullard, a Miami Democrat locked in what is expected to be a tight primary fight with former state Rep. Ana Rivas Logan, wrote a letter to U.S. Attorney General Loretta Lynch asking for an investigation. Bullard also pointed to stories from The New York Times in 2014 that raised questions over Bondi’s relationship with lobbyists for Dickstein Shapiro, a now-shuttered law firm.

Bullard said the report about Trump marks “the latest in a pattern of questionable behavior exhibited by Ms. Bondi” as attorney general.

“The pattern raises serious questions of whether a quid pro quo exists within the office for favorable treatment in exchange for campaign assistance, some of it reportedly directly solicited by the Attorney General herself,” Bullard wrote.

In public statements and a voicemail message left for a reporter with the Miami Herald and Tampa Bay Times’ joint Tallahassee bureau, Bondi said she did nothing wrong.

“I never, nor was my office, investigating him. Never. I would never lie. I would never take money. I’ve been obviously devastated over this,” she said in the voicemail.

The more intriguing question involves who is the real target for Florida Democrats. Bondi has repeatedly declined efforts to draft her to run for another office, whether the U.S. Senate or governor. There have been rumors that Trump might consider Bondi for a post in his administration.

But even if the fire is focused on Bondi right now, it helps keep alive the story of Trump University in Florida. Trump has faced heat for suggesting that a federal judge overseeing a case against the enterprise was being unfair to the presidential candidate, who has made stopping illegal immigration a centerpiece of his campaign, because of the Indiana-born judge’s Mexican heritage.

Bloomberg Politics reported this week that Trump had a conference call with supporters in which he encouraged them to join his attacks on the judge. Among those supporters was Bondi.

As the public pushes to know more and more regarding political candidates’ personal lives, some officials are opening up about aspects of their lives that they once might have been silent about. The latest example is former Florida Democratic Party Chairman Bob Poe, now running in a Central Florida congressional race, who announced Thursday in a video posted to his Facebook page that he was diagnosed 18 years ago with HIV.

Poe said he made the announcement, in part, to help dispel the “fear and stigma” that surround HIV, the virus that causes AIDS. The candidate said he is healthy and decided to step forward after meeting a woman in his community who shared her HIV diagnosis with him.

“So now it’s time to come out and share this with you publicly so that we can begin to have this discussion and remove the fear and the stigma and the shame that goes with this,” Poe said. “Because it’s those things that keep people from getting the diagnosis and the treatment that they need to live perfectly healthy lives like I have.”

It’s not at all clear how the announcement by Poe, who is openly gay, might affect the Democratic primary in the 10th Congressional District, which covers most of western Orange County. Poe’s opponents include former Orlando Police Chief Val Demings, state Sen. Geraldine Thompson and lawyer Fatima Rita Fahmy. Republicans Geoffrey Michael LaGarde and Thuy Lowe are fighting for their party’s nomination.

“Another day, another 5-2 decision from the Florida Supreme Court declaring a law written by the Florida Legislature unconstitutional.” — Jason Garcia (@Jason_Garcia), associate editor at Florida Trend magazine, on a ruling on workers’ compensation laws that fell along the court’s usual ideological divide.