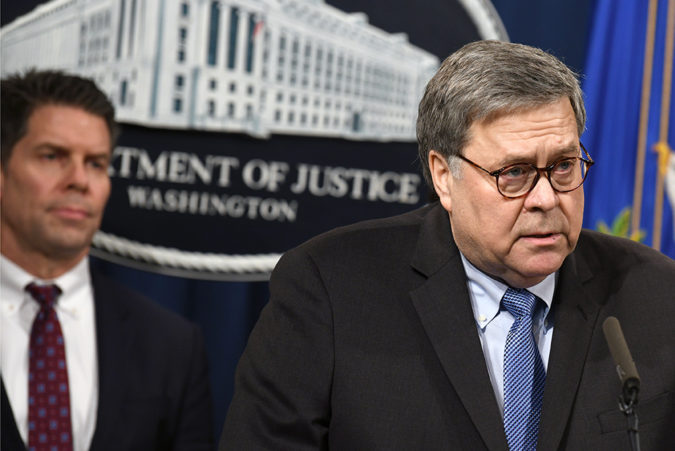 As I reported earlier, Attorney General Bob Barr announced the FBI had unlocked the cellphones of Mohammed Saeed Alshamrani, the Saudi airman who killed three sailor and injured eight others during a terrorist attack on NAS Pensacola on Dec. 6, 2019.

The Attorney General said the importance of the cellphones became clear early in the investigation. Barr said, “Indeed, Alshamrani attempted to destroy both phones, even going so far as to disengage from the gunfight long enough to fire a bullet into one.”

“The phones contained information previously unknown to us that definitively establishes Alshamrani’s significant ties to Al Qaeda in the Arabian Peninsula (AQAP), not only before the attack, but before he even arrived in the United States,” said Barr at virtual presser this morning with FBI Director Christopher Wray. “We now have a clearer understanding of Alshamrani’s associations and activities in the years, months, and days leading up to the attack.”

Barr and Director Wray expressed their disappointment that Apple refused to help law enforcement bypass the security measures on the phone.

“While the FBI’s hard work has led to an important breakthrough in this case that should be celebrated, I must also express my great disappointment that it took over four months and large sums of taxpayer dollars to obtain evidence that should be easily and quickly accessible with a court order,” said Wray. “In cases like this, where the user is a terrorist, or in other cases, where the user is a violent criminal, human trafficker, or child predator, Apple’s decision has dangerous consequences for public safety and national security and is, in my judgment, unacceptable.”

He later added, “Privacy and public safety are not mutually exclusive. We are confident that technology companies are capable of building secure products that protect user information and, at the same time, allow for law enforcement access when permitted by a judge — as Apple had done willingly for many years, and others still do today.”

The investigation is still on-going according to Wray.

During the Q&A, Barr stated that he expected no charges against either former President Barack Obama or Vice President Joe Biden as a result of an investigation into how their administration handled Russian election interference.

John H. Durham, United States Attorney for Connecticut, has been investigating how government officials dealt with investigations of Russia’s meddling in the 2016 election. Barr said while Durham was examining some aspects of the case as potential crimes, his focus was on people other than the former president and vice president.

“I don’t expect Mr. Durham’s work will lead to a criminal investigation of either man,” Barr said. “Our concern over potential criminality is focused on others.”