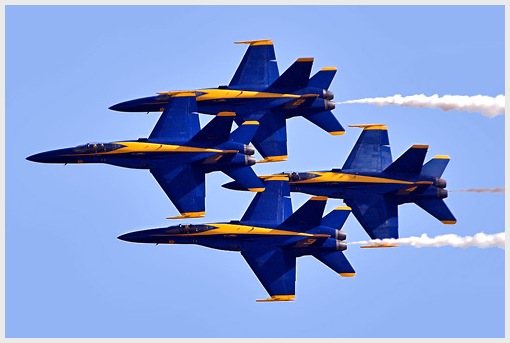 From Chief of Naval Operations Adm. John Richardson: “My thoughts and prayers go out to the family and friends of the Blue Angels after this tragic loss. I know that the Navy and Marine Corps Team is with me. We will investigate this accident fully and do all we can to prevent similar incidents in the future.” –JMR

The pilot of the jet was taking off to start the afternoon practice when the mishap occurred. The pilot died from injuries sustained during the crash.

The name of the pilot and side number of the aircraft will not be released until 24 hours after the next-of-kin notifications have been completed.

The other five Blue Angel jets were not involved in the incident and landed safely moments later.

The crash occurred approximately two miles from the runway.

The Navy will conduct an investigation into the cause of the crash.

The Blue Angels will not participate in the air show this weekend.

The Navy is deeply saddened by the loss of this service member. We extend our heartfelt thoughts and prayers to the family of the pilot and those he served with.

This bulletin went out to the members of the Blue Angels Association:

I regret to have to inform you that Blue Angels 6, Captain Jeff Kuss, USMC, died today when his aircraft crashed shortly after take-off in Smyrna, TN. The Team was in the Nashville area for the Great Tennessee Airshow this weekend.

Jeff is survived by his wife Christina and their young son and daughter.

We will be sending out more information as it becomes available. The Team is also releasing additional information on their media sites.

Please keep the Kuss Family and the entire Blue Angels family in your prayers.

Captain Jeff Kuss was a native of Durango, Colorado, and graduated from Durango High School in 2002. He attended Fort Lewis College, Durango, Colorado, and graduated with a Bachelor of Arts degree in Economics in 2006. Jeff was commissioned a Second Lieutenant in the U.S. Marine Corps through the Officer Candidate Course in 2006 and reported to The Basic School at Marine Corps Base Quantico, Virginia, to complete training.

Jeff reported to Naval Air Station (NAS) Pensacola, Florida, for aviation indoctrination in July 2007. He completed primary flight training in the T-34C Turbo Mentor at NAS Corpus Christi, Texas, and completed advanced training in the T-45A Goshawk at NAS Kingsville, Texas. He received his wings of gold in November 2009.