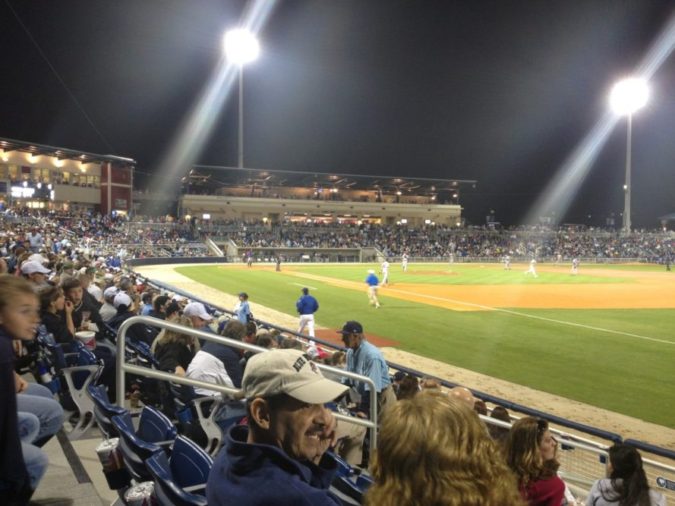 For the third time in the franchise’s seven-year history, the Pensacola Blue Wahoos were named the Don Mincher Organization of the Year for 2018.

The Pensacola Blue Wahoos had another tremendous season in the Southern League. Despite being the second-smallest market in the league and experiencing a 58% increase over last season in games impacted by weather, Pensacola still averaged the fourth-best attendance totals despite being roughly a quarter of the size of the three cities that outdrew the Blue Wahoos in 2018. This award adds to an illustrious list of awards and recognitions that have been placed on the Wahoos and their front office executives throughout the years. The Blue Wahoos—who strive towards an unmatched level of fan satisfaction—previously were awarded the Don Mincher award in the 2012 and 2015 seasons and in 2016, the team was awarded the prestigious Baseball America Bob Freitas Award for Double-A, which is Baseball America’s annual accolade that honors the best operators in all of MiLB.

“We are so grateful to be the recipient of the Don Mincher Organization of the year award,” said Blue Wahoos owner Quint Studer. “I feel very fortunate to have met Mr. Mincher when I was purchasing a team in the Southern League. He embodied the best qualities of a human being. He was giving, honest, and value-driven. I feel all the Southern League teams carry those same qualities Mr. Mincher modeled so well. This is an honor the hundreds of Blue Wahoo employees work very hard for. As owners, we are grateful to the Wahoo staff for earning this award and to the league for choosing the Blue Wahoos organization.”

Named in honor of the late Don Mincher, who served as Southern League President from 2000-11, the Organization of the Year is awarded to the Southern League club exemplifying the complete baseball franchise. By claiming this honor, Pensacola will be the Southern League’s nominee for the John H. Johnson President’s Trophy, which will be presented at the Baseball Winter Meetings in December.

The 2018 season was another triumph for the Blue Wahoos both on and off the field. The Wahoos surpassed 300,000 in attendance for the sixth time since joining the league in 2012 and also welcomed the two millionth fan earlier this year. Having already boasted a strong ownership group led by Quint and Rishy Studer, and two-time Master’s champion, Bubba Watson, the Wahoos were thrilled to announce NFL Hall of Fame linebacker and Pensacola-native, Derrick Brooks as the team’s newest minority leader.

“I want to express my sincerest gratitude to the Southern League,” said McClure. “I am honored and humbled to have been given the Woman of Excellence Award. This award is a testament to the excellence for which my superiors, colleagues and partners continuously strive to achieve. We all are working relentlessly together to improve the quality of life for our community and any others we may be so fortunate to inspire.”

Pensacola was also recognized this year for their exemplary community service efforts by taking home the 2018 Southern League Community Service Award. Many non-profit organizations including the Manna food pantry, Autism Pensacola, the March of Dimes, and the H.E.R. Foundation have seen the benefits of the Blue Wahoos’ efforts in the community. Whether it be through raising funds and awareness for these organizations, hosting in-stadium walks, or participating in fundraising events offsite, the Blue Wahoos have shown their commitment to their community.

The Blue Wahoos, in conjunction with the Studer Community Institute, continue to increase awareness of the importance of Early Childhood Education within the community by ensuring that children are ready for Kindergarten through the use of Early Childhood Education tools, it is the Wahoos’ hope to increase graduation rates, reduce crime and juvenile delinquency, raise local families above the poverty line, and attract more employers to the area. This is the third consecutive season the Wahoos have won the Southern League’s Community Service Award and the fourth in franchise history.

“A wahoo saying is, ‘the Major League organization focuses in the field, our focus is in the stands and the community.’ Our mission is to improve the quality of life,” said Studer. “This recognition touches our hearts for it connects to our primary mission.”

Lastly, the Southern League announced that WEAR’s Darren McAllister was named the recipient of the 2018 Sports Media Person of the Year, and Terry Williams was this year’s Batboy of the Year. McAllister has demonstrated his dedication to covering Minor League baseball, having even dealt with a minor back procedure and still showing up to cover the Wahoos the very next day. McAllister follows in the footsteps of Dan Shugart and Bill Vilona as Pensacola-based recipients of the Sports Media Award. Meanwhile, Williams has been the team’s batboy since their inaugural season in 2012. He is known as the “oldest batboy in baseball” at a sprightly 66-years of age.

Votes for these prestigious honors were cast by the general managers and presidents of all the Southern League clubs.