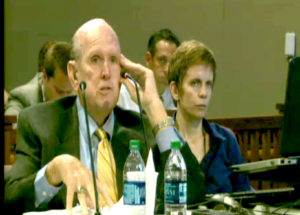 It’s unclear what course of action the Escambia County Commission will take in response to the recent U.S. Department of Justice investigation into the operations of the Escambia County Jail. The board clearly didn’t have much appetite for any of the proposals brought to them this morning by county staff.

“We are by no means saying this is the end of negotiations or ideas,” Interim County Administrator George Touart told his board during the Committee of the Whole meeting. “We are bringing this to you as the first stroke of the brush.”

The commissioners instructed Touart to take their input back to the drawing board and return with proposals that reflect a “revised focus,” and do not include any millage increases. Commissioners Steven Barry and Grover Robinson said tax hikes and jail privatization are “non-starters,” while Commissioner Lumon May stressed a broader “holistic” approach and Chairman Gene Valentino made a determined push for “exploring” privatization.

The DOJ recently issued a report that detailed various issues at the Escambia County Jail, which is operated by the Escambia County Sheriff’s Department on behalf of the county. One issue the report highlights—what Touart refers to as “the big boy”—is the need for an increase in the number of correctional officers at the jail; Sheriff David Morgan cited this need when recently submitting a proposed budget that came in $18 million higher than the previous year.

This morning the commissioners reviewed four proposals designed to locate the necessary funds to address the DOJ’s concerns about staffing levels. Some proposals included the county taking over operation of the jail, some included millage increases, some included cost-of-living decreases for county employees, and one involved privatization.

The request for a further mix of proposals came after the board—led by Robinson, and resisted by Valentino—shied away from a path that would likely have resulted in the county assuming responsibility for the jail. Touart appeared relieved.

“I don’t necessarily want the sheriff to get a carrier pigeon and give me the keys to the jail this afternoon, I can tell you that,” he said.

While the administrator would eventually describe the proposals as “the first stroke of the brush,” he initially painted them as the result of an “amicable,” but exhausted round of negotiations with the sheriff’s team.

“We have sat and we have probably beat to death so many ideas it’s not funny,” Touart told the board.

Though the commissioners did not like any of the proposals before them, Commissioner Robinson did suggest moving forward with a loosened version of proposal one. That option involved cutting county employees COLA increase in order to generate funds to hire 38 correctional officers—details that the commissioner said could be “juggled” and “shuffled”—and also put the jail back under the county’s control.

Barry suggested that, if that option was pursued, the county also continue discussions with the sheriff. He wanted to know how much money Morgan would need in order to retain responsibility of the jail.

Staff informed the commission that the sheriff’s “breaking point” was “about $7.6 million.”

“That would require a tax increase,” Touart told the board.

One option that county staff will be further exploring as they attempt to put together a possible plan of action, is the privatization of the jail. Chairman Valentino insisted his fellow commissioners be open to the exploration.

“Why would we not be willing to further explore?” the chairman posed, later reiterating: “We have to explore it whether we like it or not.”

Initially, Valentino said he had “no preference” between the options laid out by staff, but then said he was “very much in favor of proposal number four.” Later he would urge Touart to discuss the privatization possibilities with the other commissioners—mentioning that new developments in that regard had occurred as recent as yesterday afternoon—and said the board had “a moral, if not ethical,” duty to “explore every option out there.”

The chairman did allow that the sheriff could bid on the job, should the county open the jail up to private companies.

Later in the meeting, Sheriff Morgan noted that he had inquired during negotiations if the county was considering privatization. He was apparently hearing that option for the first time.

Valentino said that the privatization prospects were recent developments, and informed the sheriff that the commission wasn’t taking comment.

“We weren’t taking any speakers today, respectfully,” the chairman said, inviting the sheriff to return during a public forum.