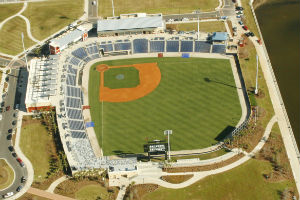 The string of missteps continues for the Hayward administration. Thanks to records received from the Escambia County Property Appraiser Chris Jones, via a public record request, the Independent News has discovered that city staff failed to apply by the March 1 deadline for an ad valorem tax exemption for the Maritime Park.

In fact, the Property Appraiser’s office had been trying to get information on the leases at the park and other city facilities, such as the airport and port, since Oct. 1, 2012. Repeated request for information went unanswered.

Finally, Chris Jones sent in a public record request of his own in March 14 for the Maritime Park. Even then, the city resisted handing over the information. Ed Spears, CMPA executive director, called the appraiser’s office the next day. According to records given the IN, he balked at giving the records to them because of the volume of work required to comply. JonesCMPA

Had the city staff complied with the early record requests, the CMPA might not have these tax problems. Another example how of the simplest daily operations are botched at city hall. Spearsnote

Also in the emails received was one from Mandy Bills, dated March 1, regarding the plat of the Maritime Park property. Apparently the city had never registered the plat or officially surveyed the individual parcels. The final plat was going to be finalized until mid-April. CMPAparcel

Unbelievable! The city needs to lease those parcels, but has not even done the most basic real estate steps to make them available.

BTW: I requested this exact information from the City at the same time I made the request of Chris Jones, June 10. The city has yet to provide the records. And I’ve not received the records regarding ECUA and the Main Street plant for the city either.