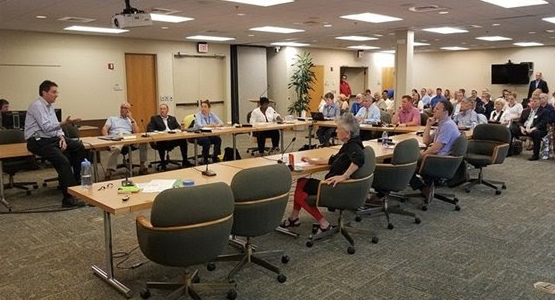 Inweekly had reporter Jeremy Morrison cover the city’s visioning workshop last week. By most accounts, it was like trying to manage a box of kittens, but the process yielded a draft mission statement and list of shared values. Democracy can be messy, but the open discussions are worthwhile- RO

The foundations of the city’s proposed mission statement is simple enough: “We desire the highest quality of life for all our citizens.” That line originally had the word “enjoy” in it, but that was removed. And the word “highest” was inserted following Mayor Grover Robinson’s suggestion that the statement be “more aspirational” and “give us something to shoot for.”

The mission statement continues, detailing how the city works to facilitate such a quality of life: “providing cost effective municipal services” as it pertains to public safety, infrastructure and public amenities, and also “working together with the community to create a healthy environment and growing economy.”

Backing up the city’s mission are a list of seven values. These values are considered to be of the highest importance to the city and would be used to guide city actions. The values are transparency, service orientation, accountability, inclusivity, focus on core mission, collaborate for broader impact and sustainability.

Some of these values, like transparency and accountability, are self-explanatory, but others act as umbrellas and pertain to various areas of city interest. Sustainability, for instance, refers to city efforts when it comes to the environment, affordable housing, historic preservation and also neighborhood identity.

While the May 9 workshop departed from the framework of the mayoral report recommendations, city council did identify the four transition team categories considered most important: crime and safety, neighborhoods, economic development and the environment. The council similarly identified its own corresponding top-four areas of focus: community safety, improved neighborhood infrastructure (lighting, sidewalks, etc.), adopting a Complete Streets approach to design to increase walkability and pedestrian safety, and also adopt a neighborhood-focused approach to city governance.

“I’m very pleased with the outcome from Thursday and what we accomplished,” Mayor Robinson said in a statement formalizing the workshop’s fruits. “This draft begins to set in motion the first initiative of a strategic plan the City has seen in a longtime. Hopefully, it will serve as a road map for citizens and elected officials for many years to come.”

A working version of the mission, values and priorities identified for Pensacola during the workshop are available for viewing on the city’s website. The public will have a chance to weigh in on that draft when it goes back before city council June 13 for approval.

Jeremy’s full report on the workshop will be in the May 16 edition of Inweekly.