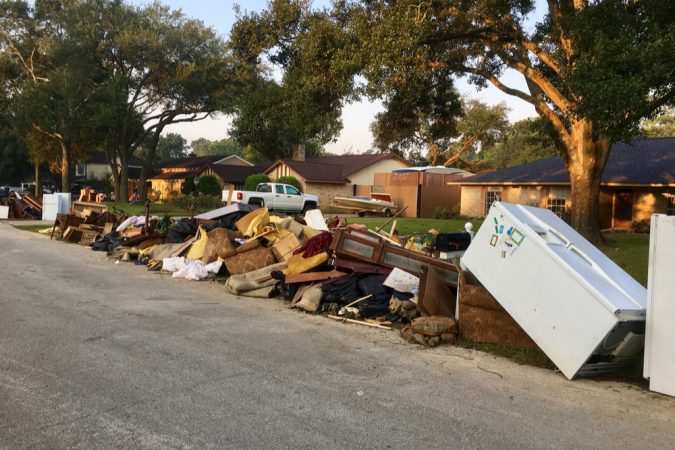 County Administrator Janice Gilley has hired three contractors to handle debris removal. The county has been divided into three zones: I-1o North – Roads Inc; 1-10 South – Panhandle Grading; and AshBritt – Westside -which includes Perdido Key area.  The debris removal contracts are worth about $12.2 million each. The contractors will submitted their removal plans this week.

The county administrator and Board of County Commissioners have stressed local contractors and minority inclusions.

The county will hold a job fair for debris  monitor inspectors – pay $1,000/week. Job fairs will be held Monday at the Central office complex off of Fairfield Drive, 3363 West Park Place, and on Tuesday at Brownsville Community Center. Gilley said job requirements are must 18 or older, U.S. citizen or Work Visa, Driver’s license with a safe driving record and proof of insurance. Thompson Consulting will oversee the debris removal.  Gilley said that 275-300 inspectors are needed.

The county’s request for the major declaration estimated the total damage at $139 million and is expected to be higher.

Superintendent Malcolm Thomas reported six schools are still without power, but he expects it to restored by the end on Monday.

“Most of the damage is superficial – trees and awnings,” said Thomas.

The most significant damage was at Holm Elementary, where one wing was flooded – the same wing that flooded in 2014. Six classrooms will have to be moved to nearby Workman Middle School.

Thomas said getting schools reopened is much a like completing a puzzle. “We have to power, water, debris managed and bus routes that can be run.”

His staff will drive the routes in cars on Monday and Tuesday to be sure that can be used by buses. He will announce the district’s plan for virtual and remote students on Tuesday.

Pensacola Beach Elementary Charter School operates on Santa Rosa School District’s calendar so it will be open on Monday.

Good news from Gulf Power: Gulf Power president Marlene Santos announced that 95% of its customers will their power restored by Monday – a day earlier than previously announced.