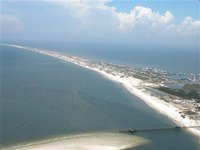 For weeks, Florida Gov. Charlie Crist has visited Northwest Florida promising that he and the state would do whatever is necessary to help battle the onslaught of BP crude oil that is creeping towards our beaches and waterways.

British Petroleum gave that state a $25 million-block grant in early May that was to help local governments prepare area contingency plans. Yesterday the State Task Force announced that none of those funds were going to local governments and instead Escambia County, City of Pensacola and others are to look to BP for reimbursement of the fund that they spent.

Escambia County Commissioner Grover Robinson heard the announcement yesterday while he was in Tallahassee. He was disappointed since the county has been preparing the paperwork to submit claims to the state.

The one bright spot is BP says that it will pay all the county’s claims within 48 hours. Time will tell if they will live up to that commitment.

Meanwhile BP announced another $25 million grant to the state. This one is clearly marked as being to continue implementation of the state’s area contingency plan.

Looks like Tallahassee has been bought and paid for while the counties battling the BP oil disaster are being forced to use their reserves to help BP with its cash flow. To date, Escambia County has spent over $3 million on this catastrophe.

There was a third BP grant of $25 million that has been earmarked for tourism advertising. Visit Florida (the state tourism agency) has been allocated $10 million of that grant.

Unless Gov. Crist brings the state checkbook, he needs to stay in Tallahassee. We need to be more than a photo op for his campaign.

This is outrageous! It is tantamount to stealing from the counties.