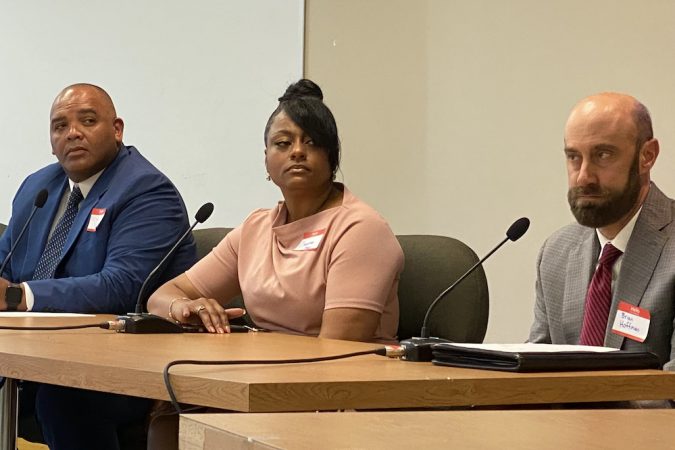 Pensacola residents got a look at their District 2 Pensacola City Council candidates Thursday during a forum hosted by Women for Responsible Legislation. The candidates dove into issues including gentrification and ecological restoration and — this being a WRL forum — also addressed the source of their “moral compass” and promised to reject “identity politics.”

Candidates running for the city council’s District 2 seat are Brian Hoffman, Charletha Powell and Brian Wyer. The candidates are vying for the seat that will be vacated by Sherri Myers.

Wyer is a Pensacola native and runs the Gulf Coast Minority Chamber of Commerce: “We have a great community, but we also have a lot of problems. There’s a lot of issues that people don’t see going on in our community that we need to have resolved, and I want to be part of the solution to make those things better.”

Powell grew up in Louisiana and now lives in Pensacola with her family: “I know what it is like to live in a blighted area with unsafe streets, sidewalks, crime and substandard housing. I’m also blessed to know and experience safe neighborhoods with thriving neighborhood associations. My life journey, education and commitment to public service make me qualified to understand the needs of all the residents in District 2 regardless of race, ethnicity or socioeconomic level.”

Hoffman is a local attorney, recently garnering attention representing A+ Mini-Storage as the business fought to cut down the largest heritage oak tree in Escambia County: “My message and the reason I’m running is: District 2 counts.”

Also participating in this forum was city council District 6 candidate Maureen Padden, although her opponent, Allison Patton, missed the forum due to being out of town. Padden, a practicing physician, comes from a military background and served as the commanding officer at Navy Hospital Pensacola: “Gandhi says you should be the change in the world you want to see. That’s actually one of the things I used to tell my sailors. I also use to tell my sailors, ‘if you don’t like change, you’re gonna like irrelevance a whole lot less,’ and that was said by General Shinseki, who ran the department of veterans affairs.”

One of the more significant topics covered during this forum included the issues of gentrification and affordable housing. While each candidate expressed concern about some longtime residents being priced out of their neighborhoods due to recent development, each also painted gentrification as a “necessary evil.”

“Gentrification, I almost call it a necessary evil. We need progress, want progress, we want to have vibrant and beautiful neighborhoods that everyone can thrive in,” Powell said, adding that the city should work to figure out a way that longtime residents can evolve with their neighborhood instead of leaving.

“Part of the solution of that is making District 2 a priority,” Hoffman reasoned, stressing that the city needed to be “figuring out where our density is going to be.”

Wyer connected gentrification to race, pointing out that it was usually Black residents who were vacating an area: “I’ll just be downright honest with you, gentrification is about race many times. It’s about money, but it’s also about race, about minorities being pushed out of areas that are now doing better and being replaced by people with more funds and resources.”

Continuing to work toward ecological restoration along Carpenters Creek also received a fair amount of attention during the WRL forum. Each candidate agreed that Councilwoman Myers — having long championed this effort — would be a valuable resource to consult, and each said they considered the restoration a long-term priority.

“It gets forgotten,” Hoffman said. “When you shop at Publix, do you realize it’s there? What you don’t see doesn’t mean there’s not a significant ecological issue there that’s creating erosion problems, and it has the potential to be a natural resource.”

Wyer pointed out that the District 2 representative would need to work with other council members and balance efforts: “We have to realize other districts have challenges too. It’s a matter of working together with all the other districts too to identify our top priorities.”

And Padden said that she felt Carpenters Creek was a city-wide issue, not just a problem for District 2: “Anything that affects one district affects another, and as a community, we need to work together to fix Carpenter’s Creek.”

As WRL leans heavily to the right politically and embraces religious themes, each candidate participating in this forum was also asked to describe the “basis of your moral convictions that will shape your decision making.”

Wyer said that he hoped to change the popular conception of a politician: “I hear politicians being described in bad terms, and that bothers me. Why can’t a good person with values be a politician? If you can’t have good values and be a politician, there’s something wrong with our whole society.”

Powell said, “My moral compass is driven by my faith” and that she was “open to listening to all people in the district regardless of their moral compass or how they guide their life journey.”

And Hoffman reflected on his courtroom experience: “You have to have compassion; you have to be firm in your conviction. But you have to understand there’s no roadmap that answers that question. Your moral compass is a living, breathing thing you create based on your experiences and always looking at other human beings with compassion.”