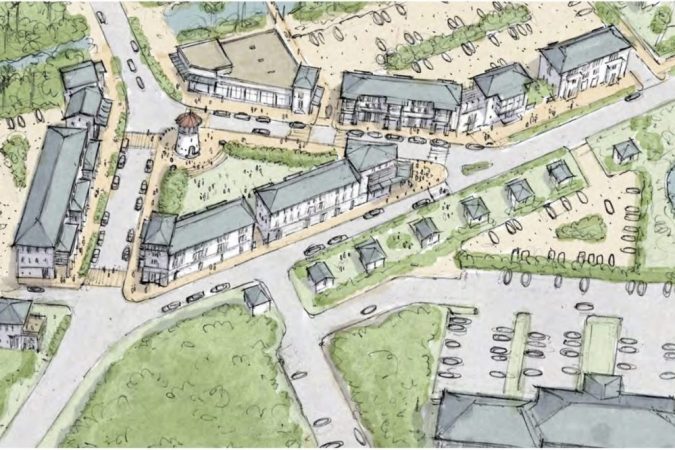 DPZ CoDesign is a Miami-based architecture and town planning firm that was founded in 1980 as Duany Plater-Zyberk & Co. by the husband-and-wife team of Andrés Duany and Elizabeth Plater-Zyberk. The firm has offices in in Gaithersburg, Md. and Portland, Ore.

Duany and Plater-Zyberk are charter members of the Congress for the New Urbanism (CNU) in 1993. In the last decade, DPZ has developed a new model zoning code, called the SmartCode. This is based on an analytical tool called the Transect, which classifies degrees of urbanism within a continuum, from the urban core, through general urban neighborhoods, to rural wilderness.

A key method to their planning is charrette, which DPZ describes on its website:

“The charrette is a dynamic and stimulating process of design. A week-long work session assembles key decision-makers in an iterative design cycle of proposals, feedback and revisions, organizing a complex project quickly. Rapid prototyping ensures informed choices and saves months of sequential coordination. In a private setting or with a public audience, the charrette ensures a comprehensive approach and builds support for the vision.”

DPZ played a major role in helping cities along the Mississippi Gulf Coast and in south Louisiana after Hurricane Katrina. Duany organized and led the Mississippi Renewal Forum in 2015 that generated redevelopment plans for 11 Mississippi municipalities.

According to archives of several Louisiana newspapers, Duany developed planning codes for Erath, Abbeville and Delcambre through his Acadiana Corridor Charrettes that were funded by the Louisiana Recovery Authority. He also helped develop plans for Lafayette and Arabi in St. Bernard Parish. Duany had projects in New Orleans and Baton Rouge, too.

DPZ developed the plans for several resort towns along 30A in south Walton County—Seaside, Rosemary Beach and Alys Beach.

Duany and Plater-Zyberk have written several books on New Urbanism, two with Jeff Speck, who consulted in the OLF-8 master plan— Suburban Nation: The Rise of Sprawl and the Decline of the American Dream (2001) and The Smart Growth Manual (2009).

In March 2016, DPZ Partners (another predecessor to DPZ CoDesign) delivered its master plan for Perdido Key. The project director and project manager were Marina Khoury and Mike Welch, respectively. The pair have also led the OLF-8 project for DPZ.

DPZ commissioned two property owners surveys, one in 2011 and the second in 2015, and used the residents’ answers to define the master plan objectives. According to the report, 3,285 surveys were sent out and 766 (24%) were returned. DPZ didn’t survey Beulah residents and business owners for its OLF-8 plan.  SEE UPDATE

The design team focused on five “pedestrian sheds” for potential locations of town and neighborhood centers.

• Site A: Generally, at the intersection of Johnson Road with Perdido Key Drive as it curves up north;
• Site B: Generally, along the north side of Perdido Key Drive at the southern end of WCI properties and where the Cocina Village used to exist;
• Site C: On the north side of River Road, facing the intracoastal waterway;
• Site D: At Innerarity Heights; and
• Site E: At and around Flora-Bama.

Five years later, none of the town centers have been developed.

DPZ’s retail analysis reported that there was retail demand for 30 to 40 new stores and restaurants that would increase the gross sales to $28.2 million by 2020. Retail and restaurants have struggled in the Perdido area, even before COVID.

The Perdido Key Master Plan has come up three times since 2016:

In August 2018, the board was upset that Underhill had blocked opening to public access land the county owned next to the Crab Trap. Underhill argued the land was needed for the county’s habitat conservation plan and the county should buy other property closer to the core of the island, as called for under the Perdido Key Master Plan.

In October 2018, Democratic challenger Scott Trotter alleged Underhill was in the pocket of Perdido Key developers who wanted to build a town center under the Perdido Key Master Plan. Underhill defeated Trotter, 56%-44%.

In September 2019, the Board of County Commissioners voted to swap the Florida Department of Transportation  2.5 miles of Beulah Road for 6.2 miles of Perdido Key Drive. The negotiations began in May 2018. Some felt that the swap would make it easier to implement the Perdido Key Master Plan.