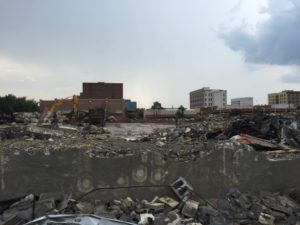 While waiting on word from Florida Attorney General Pam Bondi on whether the move was actually legit, the Pensacola City Council on Tuesday decided to go ahead and approve a first reading of an ordinance that aims to lock in a soon-to-sunset tax break for a development planned for the now-leveled landscape laying in the heart of downtown.

The ordinance is an effort to enshrine a 10-year property tax exemption, or EDATE, for Quint and Rishey Studer’s, or the Daily Convo, LLC.’s, $50 million multi-use project downtown before the tax incentive — tied to the sunsetting Florida Enterprise Zone Act — disappears at the end of the year due to it not being reupped during this past state legislative session.

“Depending on what you do today, you may end up going over and seeing a large sand lot,” Councilman P.C. Wu warned, referring to the current barren state of the recently cleared former site of the Pensacola News Journal. “Let me say that one more time: I firmly believe that the vote you have in front of you is a vote for the future of the city of Pensacola and the vision you have for it.”

The attempt to solidify the EDATE — representing just over $2 million over the 10 year period — was also advocated by Mayor Ashton Hayward, who said the project would help draw a higher density population downtown.

“A city’s like an ecosystem, each one has its own DNA,” Hayward said, talking about Pensacola’s “organic growth,” how “incentives are really important to making that happen” and about how “downtown’s are the backbones to great, great cities.”

While each council member expressed support for Daily Convo’s planned project — a mix of residential and commercial — some also cautioned against moving forward without an opinion from Florida Attorney General Pam Bondi (which Escambia Property Appraiser Chris Jones has requested) on whether an Enterprise Zone EDATE may be requested prior to the act’s sunset and two years prior to the project’s 2017 completion (the point at which the EDATE would typically take effect). The Daily Convo project is eligible for the EDATE due to its location in a Enterprise Zone, as the incentive ordinarily requires that a project create a certain number of new jobs.

“Wouldn’t it be in the city’s best interest to wait until we have that opinion?” asked Councilman Larry B. Johnson. “How are we going to look if we pass this ordinance today and Pam Bondi comes back in three weeks and says ‘you shouldn’t have done this?’”

Questions were also raised about the appropriateness of using an Enterprise Zone-based exemption, intended to offer tax incentives for projects located in blighted areas which provided tangible positives like jobs for the area’s inhabitants. Councilwoman Sherri Myers noted that the locale was “barely in the Enterprise Zone” and “certainly not in a distressed area.”

“The more I look into this EDATE business, the more questions I have,” Myers said, describing the city’s EDATE efforts, particularly what she said was an inactive Enterprise Zone Board, as “a sham” and “disgraceful.”

Council members Jewell Cannada-Wynn and Gerald Wingate both brought up the issue of affordable housing, asking if the project would be focusing on providing it.

“I just want to make sure that that is the focus, that there will be workforce housing,” Cannada-Wynn said.
Robert Emmanuel, an attorney representing Daily Convo, LLC., said that was “exactly correct.” He said the residential component was designed to accommodate “teachers, policemen, firemen,” and young professionals who wanted to “live downtown, work downtown, shop downtown.”

“Exactly correct,” Emmanuel assured, again evoking “a teacher, a fireman, a policeman, those types of people.”

Andrew Rothfeder, president of Studer Properties, explained after the meeting that the residential units would likely range from $800 a month for a studio to $2,400 for a three bedroom apartment. He said there would be about 120 studio and one-bedroom units, another 120 two-bedroom units and about 15 three-bedroom units.

During the meeting, Rothfeder took a few minutes to relay to council his boss’s objective, which he said was “mission-based.” He explained why he felt it was important to bring a mixed-use development, something Emmanuel had called “the one missing component to revitalize downtown,” to the site.

“Our mission is to improve the quality of life of the people of Pensacola,” Rothfeder said, preaching the necessary trinity of “live-work-play” in order to realize a revitalized downtown that didn’t hit a “plateau.” “It’s a three-legged stool. Without places to live, the stool cannot grow any further.”

Rothfeder went on to say that in doing homework in preparation for such a project, the Daily Convo team had hit upon the reason why no one else was building such a project even when market research indicated it was in demand: such a project “loses tons of money.” In short, area residents can’t afford the high rent needed to make for a profitable enough venture.

“People can only afford what they can pay, but the project cost the same,” he said. “That’s the answer.”

By that math, Rothfeder explained, there were two elements needed to make the project work.

“The two pieces that are needed is someone who does not need to make money and that EDATE,” he told council, adding that the project was already underway — to the tune of a $700,000 demolition — and that the previously-embraced EDATE was a factor in their secured funding.

Some council members wondered aloud if Studer might be bluffing about the EDATE being a deal breaker — “Truth of the matter, it would be here weather we gave it a tax exemption or not,” said Myers — but Daily Convo’s attorney stood by the assertion.

“Will this project happen with or without this EDATE?” asked Johnson.

“The answer, frankly, is no,” replied Emmanuel.

While Johnson attempted to convince his fellow council members to hold off for the AG decision, and Myers said waiting was the “most rationale, responsible thing the council can do,” others disagreed — Councilman Andy Terhaar contended that “sometimes there are things more important than procedure,” while Vice President Brian Spencer suggested that “the fate of this project hinges very much on our action to support this EDATE” and advised moving forward “full steam ahead.”

Agreeing to incorporate any word from the attorney general into their calculations during the ordinance’s second reading before year’s end, the bulk of the council got on board with the EDATE ordinance for Daily Convo. The first reading passed by a vote of 6-2, with President Charles Bare citing procedural issues and siding with Myers in dissent.