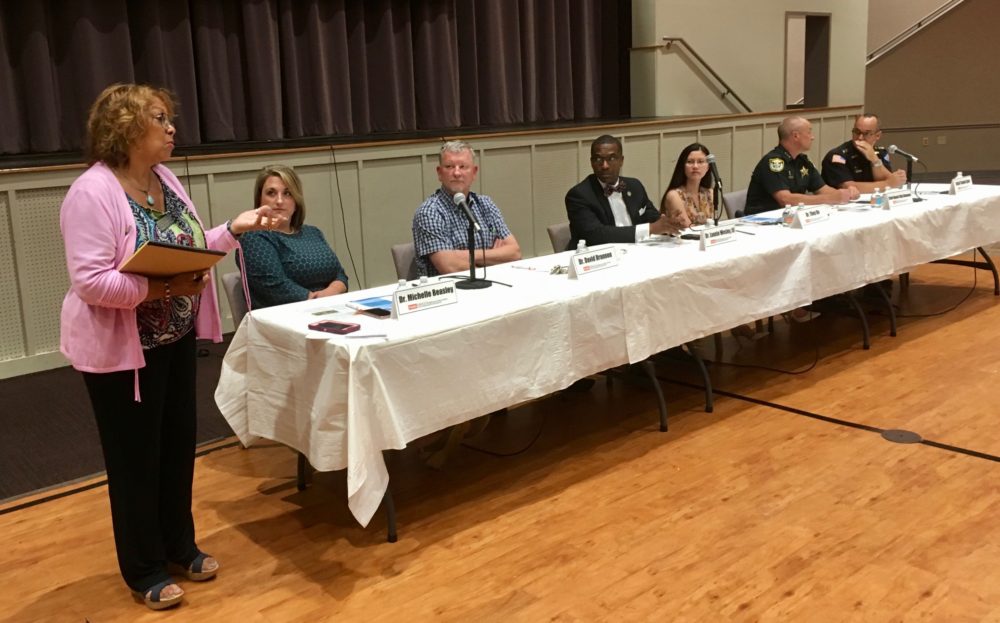 With marijuana laws rapidly evolving around the country and inside the state, people are sometimes left wondering how best to navigate the changing medical and legal landscapes. A forum in Pensacola Tuesday evening offered folks an opportunity to have some of their marijuana-related questions answered by members of the local medical and law enforcement community.

The event was Florida A&M University and the Medical Marijuana Education and Research Initiative’s third such community forum. Following the passage of Florida’s constitutional amendment allowing for medical marijuana, the state legislature allocated funds for the purpose of educating communities about marijuana and its medicinal use; FAMU receives $10 from each medical marijuana identification card that is issued in the state to put toward this effort.

During each of its community forums, FAMU is not only providing a venue for people to have their questions answered, the meetings also allow the university to gather information from locales around the state in an effort to better understand how Florida’s changing marijuana laws are impacting communities. The research project will wrap up in June of 2020, and the information gathered could be used to inform future public policy.

“What we are hoping to do this evening is give information and get information,” explained Dr. Monica Hayes, deputy director of MMERI.

“The beauty of this,” Hayes said, “is that you’re hearing from your own folks.”

Some forum attendees were interested in hearing about marijuana’s medical uses. The doctors on the panel were able to explain how everyone has cannabinoid receptors in their brain, how medical pot could mean eliminating other medications from the medicinal diet, how different strains of marijuana were better for conditions ranging from anxiety to Parkinson’s. They also explained how currently un-regulated products advertised as CBD sometimes contain little actual CBD, and about how the use of medical marijuana isn’t covered by insurance.

But, mostly, people were interested in how the state’s evolving legalities regarding marijuana would play out on the ground level. They wanted to be sure they wouldn’t find themselves in legal trouble for using medical marijuana.

““Now, Chief Simmons, don’t forget me when it comes time to remember me on the street,” one woman joked.

Dr. Hayes had noted at the onset the importance of the participation of law enforcement in the community discussion. Something that’s long been illegal, that people have long been put behind bars for, is suddenly somewhat legal.

“These two are really important,” Hayes had said in introducing Simmons and Lyter, “because as you know, Florida says one thing and the federal government says something different. These gentlemen are going to try to help us make sense of the differences between the two.”

The variance between federal law (which considers marijuana as illegal as ever) and state law (which in Florida allows for medical use) isn’t the only thing people have to keep in mind. Both law enforcement officials stressed that medical marijuana was far from full legalization.

In order to legally use marijuana, a person must possess a state card identifying them as a patient with a prescription. To avoid any legal issues, they need to carry this card with them and also make sure that their cannabis is purchased from an approved source — “you still can’t buy it from your neighborhood drug dealer” —and contained in the required opaque white container.

“If you’re going to have marijuana, you’ve got to follow the rules.” Chief Deputy Simmons said. “Follow the rules, do it as prescribed, and you don’t have anything to worry about.”

Of course, Simmons and Lyter explained, a person may still get into trouble even if they have their medical bonafides in order. Driving while impaired on medical marijuana, for example, is viewed the same as driving drunk.

Interestingly, and unlike for alcohol, Chief Lyter explained that there is not currently a scientifically ascertainable threshold identifying marijuana intoxication. This is left up to the officer on the scene, and based on their assessment of an individual.

“It’s your driving pattern, field sobriety exercises, that kind of stuff. There’s not a threshold number for it,” Lyter said.

The local law enforcement officials also advised people to keep abreast of changes in state marijuana laws, noting how quickly they had evolved over the last few years and how they may change more in the years to come.

In addition to consulting local law enforcement about how the agencies would be handling medical marijuana, attendees of the local FAMU forum also had questions about how the use of the drug would play out when it came to the workplace. Could an employer still fire them, for example, if cannabis showed up in a drug test?

While it is currently up to the individual employer how to handle the issue, some fields do not tolerate the use of medical marijuana at all. Law enforcement, for instance, does not allow for it.

“We cannot use medical marijuana, any police in the state of Florida, because it is a violation of federal law and the Florida Department of Law Enforcement will decertify you,” Lyter said.

The issue of employers not tolerating the use of cannabis, Dr. Brannon said, has caused some of his patients to change jobs. He said he’s hopeful that employers will increasingly warm up to the concept of medical marijuana.

“I’ve got patients changing their career because their health has improved so much. They’re just quitting their jobs as a teacher or whatever,” he said. “But it’s slowly changing.”

Offering a perspective aiming to transcend both the medical and legal, Pastor Wesley told forum attendees that while he wasn’t in favor of recreational drug use — “a lot of times when it’s recreational it leads to other things that really I think we all can understand are bad for our health as well as bad for our society, our health, our culture” — he did feel that individuals and their doctors should educate themselves about the use of medical cannabis in order to determine the best path.