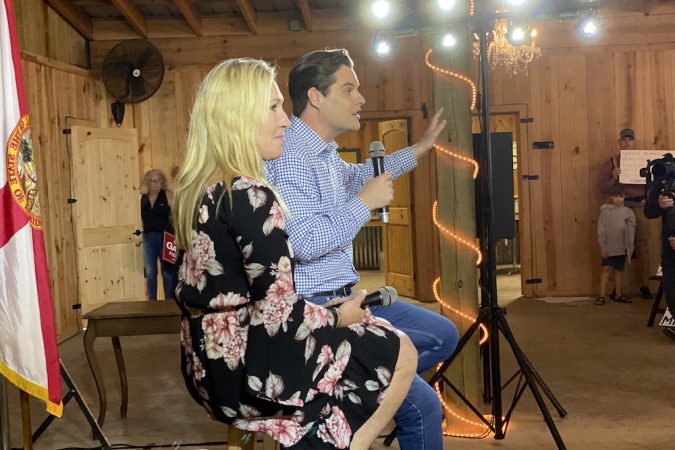 Out on the fringes of American politics, a quarter tank of gas outside of Pensacola, up in the sun-soaked fields of Milton, inside a place called the Heaven’s Trail Event Barn, U.S. Rep. Matt Gaetz (R-FL) kicked off his congressional reelection campaign Saturday. Joining the congressman for the day’s string of events was Rep. Marjorie Taylor Greene, a QAnon enthusiast from Georgia.

Together these darlings of the Right Wing’s wingnut wing — at times taking the wacky tone of morning radio DJs before pivoting to that of giddy revival evangelists or embittered, exiled militants — painted themselves as Davids bravely battling the Goliaths of not only the Radical Left but also Republicans who refuse to continue huffing the fumes left over from former president Donald Trump’s America First theology.

“The people we work with, they want to offer a different, competing vision for success. They root for America’s decline,” Gaetz said. “And it’s not just the Democrats; it’s some of the Republicans who think they’ll somehow do better if they oversee managed American decline. That’s not what Marjorie and I are about; we’re trying to reignite the passion in the Republican Party that we saw do so much good for people when Donald Trump was president.”

Over the course of their remarks to the barnful of supporters, Gaetz and Greene hit all the notes one might expect from discussing headlines currently in the news — such as the pair being only two of three members of congress or the senate who voted against a recent bill directing funds to Ukraine as it holds off an attacking Russia, or the hullabaloo they’re whipping up about a joke late-night comedian Jimmy Kimmel made regarding Will Smith slapping Greene — to dipping into an old sack of Trump’s greatest hits, like The Wall, or Hunter Biden’s Laptop.

One point that Gaetz and Greene hammered was their opposition to a COVID vaccine mandate, particularly for military members.

“Let me tell you something right now, I’m not vaccinated,” Greene said. “I can say it because it shouldn’t be anything that changes anything in any of our lives, right? It just shouldn’t hold us back in any way in our job, in the military, in school, in any way. And this is something that we absolutely have to fight.”

Gaetz, also against any vaccine mandates — “I’m against the nosiness, personally” — contrasted any mandate with the pair’s righteous crusade “for freedom and against medical tyranny” and also against useful boogeyman and the country’s chief medical advisor, Dr. Anthony Fauci, and, by extension, his Democrat congressional challenger, Rebekah Jones, a former data analyst whom Florida Gov. Ron DeSantis fired after challenging the state’s COVID information being released to the public.

In fact, the representatives said, Dr. Fauci should be investigated. And President Joe Biden should be impeached. And the “lyin’ media” should be “held accountable.”

“The freedom of the press is not the freedom to lie,” Greene said.

“But you don’t even have to look to Washington D.C. or New York to find lyin’ media,” Gaetz added. “We have lyin’ media right here in Northwest Florida.”

Describing local media as “woke,” Gaetz railed against a recent article labeling him and Greene as “outsiders” within their political party — something unarguably, academically true and even embraced by the representatives themselves — while also parlaying the descriptive into a rally-cry-mind-meld with supporters.

“Maybe in Washington, we are the outcast. But you know what? Maybe I’m with a bunch of outcasts right here now,” Gaetz shouted.

While these local, in-district events — all located far enough out in the boonies to assure Gaetz wouldn’t get a big-city slushie thrown on him again — served as the Northwest Florida congressman’s campaign kickoff, both he and Greene spoke about how they also plan to continue preaching Trump’s America-First gospel on a national level.

“We understand that to preserve our freedom; we can’t just hang out with each other in, like, a cool bar and talk about how much we love America. We actually have to go out and evangelize others; we have to convince other people that our vision is the right vision,” Gaetz told the already-true-believer crowd in the barn. “You see, Marjorie and I, we’re two folks there in congress, and we’ve got a little batch of people that we influence, but our legions must grow.”