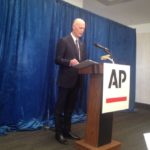 Gov. Rick Scott unveiled a proposed $77 billion budget yesterday morning at the AP Legislative Planning Session. His “Keep Florida Working Budget” for 2015-16 uses nearly all of the reported $1 billion surplus on taxes and fees cuts –$673 million–and an increase in education spending and cuts 1,353 positions from a total of 114,444 state jobs.

“It’s a strong budget because our economy is strong,” Scott told a gathering in the Capitol of state reporters and editorial writers. “The way to make it stronger is return more money to the people.”

The majority of the tax cuts are cut in cell phone and cable television taxes ($470 million), which would save “an average family” spending $100 a month on those utilities about $43 a year, or $3.58 a month.

His other cuts include exempting college textbooks from the sales tax, costing $41.4 million; an exemption of 2,189 businesses from the corporate income tax at a cost of $18.4 million; and the elimination of a tax on manufacturing machinery and equipment at a cost of $142.5 million by 2017.

It’s not certain if the Florida Legislature will also pass the Communication Services Tax cut down to the municipal level. The city of Pensacola has budgeted $3 million revenue from communication service taxes – 6.41% of its budget.

The governor said, “We are giving Floridians back $673 million in their money.”

Missing from the budget was Medicaid expansion. He made it clear at the press conference that he has no appetite for it, but would not stand in the way of the Legislature if the lawmakers passed it. However, House Speaker Steve Crisafulli and Senate President Andy Gardiner, who followed Scott at the press conference, expressed no support for pushing the issue.