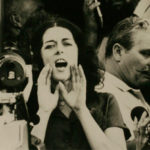 A 30-minute excerpt of the documentary film, Green Fire: Aldo Leopold and a Land Ethic for Our Time, will be shown and discussed at the February meeting of 350 Pensacola.

Green Fire was produced in partnership between the Aldo Leopold Foundation, the Center for Humans and Nature, and the US Forest Service. The film provocatively examines Leopold’s thinking, renewing his idea of a land ethic for a population facing 21st century ecological challenges. Susan Feathers will show the film and lead a discussion exploring American perspectives on the value and place of land and wildlife in human affairs.

Feathers attended The Land Ethic Leaders training at the Aldo Leopold Foundation in 2012. Graduates of the training return to their communities to find creative ways to engage local communities to consider Leopold’s ideas in light of local environmental challenges.

Learn more during the meeting about an opportunity to become part of a reading group that will read a novel together and discuss it in relationship to The Land Ethic. The project will be conducted by Feathers in coordination with the Aldo Leopold Foundation.

This program is free and open to the public. For more information, please call 850-572-7230 or email 350pensacola@gmail.com.