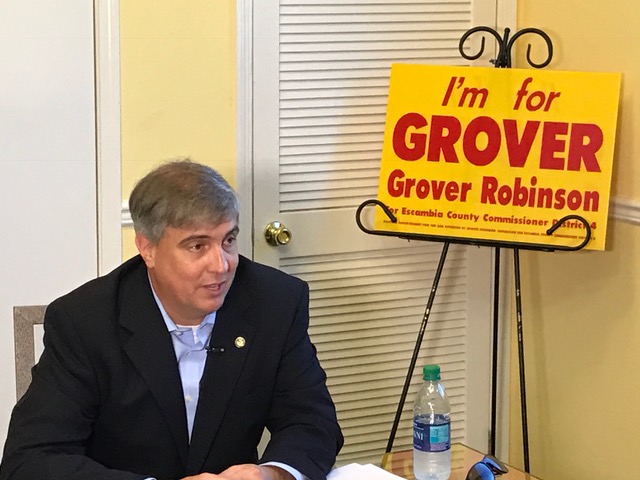 Escambia County Commission chairman Grover Robinson announced this morning that he will not seek a fourth term to his District 4 seat in 2018.

“I make this announcement today in hopes of providing sufficient time to everyone in the district so good people can plan now if they wish to run in two years,” Robinson told the media that had gathered in the conference room of Duncan-McCall.

“While I greatly appreciate the support of District 4 citizens to allow me three terms to serve them, the seat is far more important than the person who temporarily occupies it,” he said. “Therefore, now that the current election cycle is over, I would ask much time as possible for good individuals who would seek to serve this board and this district.”

While Robinson is stepping away from the BCC in two years, he did not rule out running for another political office. He said that he had been asked this year to consider running for Congress or State Senate but had turned them down because his passion is to serve locally.

“Public service is a calling,” said Robinson. “Locally is where you have have the most impact.”

He did admit that he is interested in running for the mayor of Pensacola in two years but wants to hear from the public whether they want to do so. The position comes open in 2018. Mayor Ashton Hayward hasn’t announced whether he will pursue a third term.

“The Pensacola mayor is the only elected executive office in Northwest Florida where you have an opportunity to a real impact,” said Robinson. “It’s a unique position.”

Commissioner Robinson will be my guest today on “Pensacola Speak” at 5:10 p.m. He will be in the studio and will take calls.

Here is the transcript of Robinson’s remarks at the press conference: Grover Robinson.