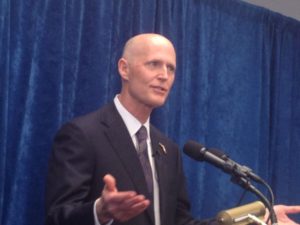 The AP Legislative Planning Session was great. It was an opportunity to sit in a room with the top political writers in the state and quiz state leaders…and I held my own, getting in several good questions with CFO Jeff Atwater on the forced ouster of FLDE Commissioner Gerald Bailey and with State Senate President Andy Gardiner and House Speaker Steve Crisafulli on a possible legislative fix on the DOH bungling of the regulations for Charlotte’s Web and the proposed bill by Senator Brandes that would expand medical marijuana in the state.

Both Atwater and Agriculture Commissioner Adam Putnam were clear that they want to review the process of how department heads are replaced. Attorney General Pam Bondi-who campaigned heavily with Gov. Scott this past election cycle – was much more supportive of the governor. Gov. Scott refused to answer many questions about the issue. He said his staff have posted his answers on his website and that he and his staff had done nothing wrong. Then Gov. Scott abruptly walked out of the room.