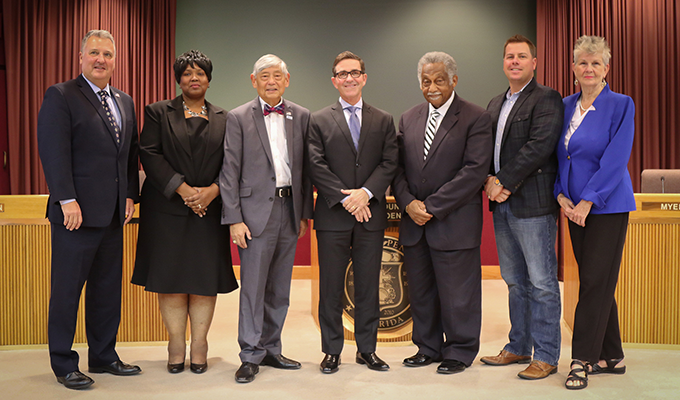 Pensacola Councilwoman Sherri Myers has asked her fellow council members to pass a vote of confidence in favor of Council President Brian Spencer, whom Mayor Ashton Hayward criticized in a letter after the Pensacola City Council’s special meeting regarding the ECUA storage tank under construct on North Palafox Street. She placed it on the agenda for the Oct. 12 regular meeting.

In his Sept. 22 letter, Mayor Hayward indicated his displeasure with the “tone of the discussion and the disparaging remarks” directed toward the city attorney.

“The days are long past where the governing body of a community can chain individuals to a post in the public square and invite anyone to throw stones at them,” wrote the mayor.

Hayward placed the blame on Spencer and included with the letter a 20-page memorandum on meeting order and decorum prepared in 2014. He said, “In light of the improper decorum that was on display at Wednesday’s meeting, now is a good time to review procedural tools that you have as council president to conduct the meeting…”

After receiving the mayor’s letter, Myers sent him an email on Sept. 24 asking for more details.

She wrote, “I am not sure what part of the special meeting you were watching as there are no facts alleged in the memo… please be specific regarding the conduct you are complaining about and refer me to the time that it occurred so I can go back and watch it.”

The mayor did not reply.

At Monday’s agenda review, Myers declined the council president’s request that she withdraw the item. She said, “I’m not going to entertain moving it because this attack was not only on the council president, but as the council as a body. They accused this body of doing something that we have never done and would never do.”

Council President Spencer said he had received support from the community after the letter was made public and wanted to “sidestep (the) spectacle” of a Thursday confidence vote.

“I was honored to hear from many people that they felt that the meeting that I handled it as best as I could,” he said.

However, only the sponsor of an agenda item can withdraw it under council rules.

Calling the confidence vote a “circus item,” Councilman Larry Johnson argued the mayor was exercising his First Amendment right and asked for City Attorney Lysia Bowling to render an opinion on the matter.

Bowling appeared to be little perplexed as to what Johnson was requesting.

“I would say that there’s a First Amendment right to speak,” said the city attorney. “I don’t see that it was a direction of council, but I could look at it more carefully if you wish. I understand the issue that you’re speaking of. I don’t think there’s a charter violation just from looking at the language.”

She reminded the council about an earlier opinion she issued regarding the usurpation and encroachment of the executive and legislarive branches of city government.

Bowling said. “I think that it’s clear that it would be inappropriate and a charter violation for one branch to direct the other branch to act, and I just … reading the letter, it appears that it’s just a statement, but not a direction. Nothing to mandating city council to act, so I don’t think it’s in the nature of a charter overreach. I think it’s just in the nature of free speech. I’d be glad to look at that more specifically.”

Johnson said that he thought the confidence vote was a waste of time since the council president’s last meeting would be in November.

“I think is a poor use of our time, so on a First Amendment … you know, you can’t have it both ways,” he said. “Either he has a First Amendment right to express himself along with everyone else or not, so I just think we could be spending our time with something more important than this right here. Thank you.”

Myers countered that the confidence vote has nothing to do with free speech.

“Nobody’s saying anybody doesn’t have the right to speak, but the council, we also have the right to express our views,” she said “And the mayor, I would love for him to start attending council meetings. He can certainly show up and express himself, and he can also sign up for three minutes and express himself however he wants to do it, but this is definitely not any restrictions on anybody’s First Amendment rights.”

Myers continued, “First Amendment doesn’t even factor in here. Nobody is restricting anybody’s freedom of speech.”

3 thoughts on “Have you heard the one about the Pensacola City Council, vote of confidence, circus, First Amendment rights?”