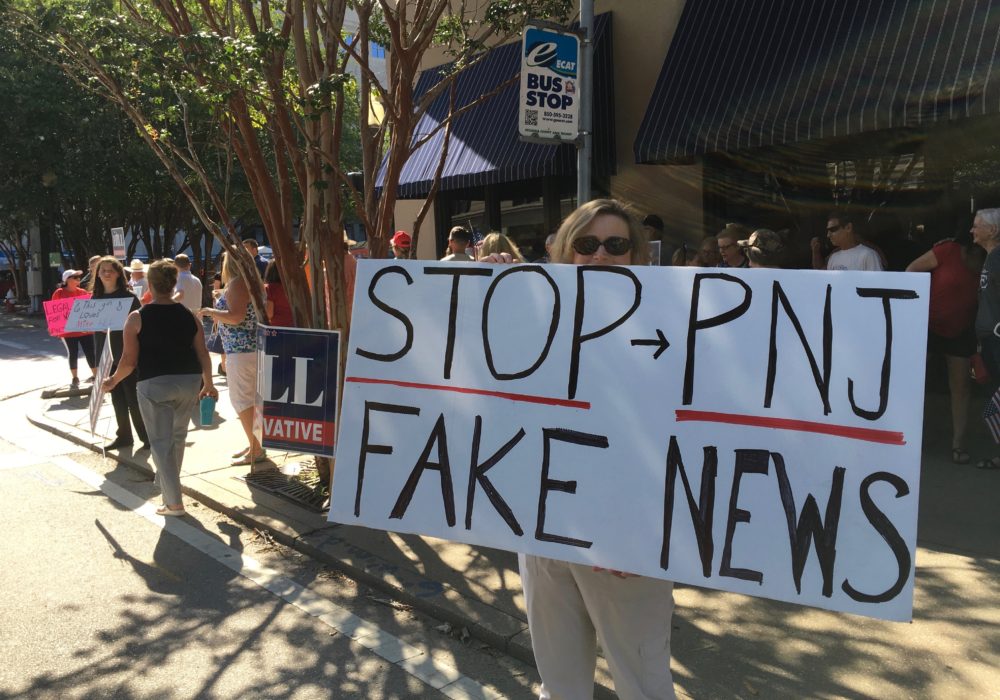 In a show of support for embattled state legislator Rep. Mike Hill, a group of protestors spent Saturday afternoon on the corner of Palafox and Garden streets in downtown Pensacola, railing against “fake news” outside the offices of the Pensacola News Journal.

“He’s a good man,” Josie Cossey said about the state representative. “He loves everybody.”

In May, Rep. Hill spoke at a gathering of the Women for Responsible Legislation. During the event, he responded to a comment about putting gay people to death based on Biblical scripture with “says that in the Old Testament, too,” and laughed off a suggestion of proposing such legislation with “yeah, wonder how that’d go over?”

The exchange was reported on in local media, with audio recordings of the meeting released. Fallout included calls from fellow legislators around the state and across the political spectrum for Hill to either apologize or resign.

But, according to the folks assembled outside the mostly empty News Journal offices on Saturday, this is not what happened.

“I think they’re making it up,” Cossey said of the reports concerning Hill’s comments. “They’re fake and that’s why I’m here.”

The real reason Hill is coming under fire, Cossey explained, is due to his position on abortion; the legislator has said God told him to try next year for an Alabama-styled abortion bill in Tallahassee.

“It’s not really about what happened at the meeting,” she said.

This was a common sentiment among the protestors. Similarly, a man named Dennis, who declined to provide a last name, felt that Hill was being attacked because he is a “conservative Christian.”

“And I’m thinking that one question they put on him was a trick question,” the man said, adding that he believes the question “caught him off guard.”

Saturday’s rally was organized by Geoff Ross. In addition to being a candidate for Santa Rosa County Commissioner, Ross’s business card identifies him as retired from the Navy and founder of Rouge Patriot Group, Inc., as well as having been a bodyguard for Sarah Palin and Dr. Ben Carson.

“This isn’t so much about Mike Hill,” Ross said. “It’s about getting facts right.”

Ross said that he has known Hill for 14 years and thinks the state representative is being misrepresented in the media: “Obviously, Mike Hill does not support executing gay people.”

“He’s sad. He’s sad in his heart, because that’s not who he is,” Ross said, explaining that he’d discussed the recent events with Hill.

In Ross’s version of events, Rep. Hill’s laughy response in the meeting was misread— “when he chuckled, the media took that as he supported that or endorsed that”—and that subsequent coverage amounted to a “character assassination.”

“This isn’t bashing any particular person, it’s not bashing the media,” Ross said, contending that the press was being unfair to Hill. “We’ve got to make sure it doesn’t hurt people’s character. This was a character assassination.”

As for the critiques of Hill coming from his fellow legislators? Ross doesn’t seem too surprised: “The Republican Part failed Mike Hill. They failed him.”

“They took the politically correct side instead of learning about the facts first from Mike Hill,” he said.

One commonality shared among Hill’s supporters protesting what they perceived to be “fake news,” was that they said they had listened to the audio of Hill’s comments, but also felt that the media had manufactured the news.

“He didn’t say anything,” said James Calkins, referring to the WFRL meeting. “That whole entire episode is being used to destroy Mike Hill.”

Calkins, husband to Hill staffer, was in the midst of a busy week on the legislator’s behalf. A couple of days earlier he had attracted media attention when he alleged that state Republican leaders had excluded Hill from a bill signing for Florida’s new law banning sanctuary cities.

Saturday, Calkins painted Hill as crusader for the conservative movement.

“Mike has now become a symbol of the conservative movement,” he said. “He’s no longer Mike Hill, representative of District 1. He’s now Mike Hill, the leader of a movement.”

As Calkins returned to narrating the event into his phone, assumably live streaming the protest, another Hill supporter explained why she had come to the corner of Palafox and Garden.

“I don’t like fake news or lies, when they spin the truth,” said Sandra Atkinson.

Atkinson is an elected Republican state committeewoman in Okaloosa County. She made news last year after publishing a Facebook post in which survivors of the school shooting in Parkland are referred to as “crisis actors”; the committeewoman later apologized for the post.

On Saturday, Atkinson said she felt media coverage of Hill’s comments were an overstep.

“I think the media should just state the facts,” she said, “and let the readers decide what they meant.”