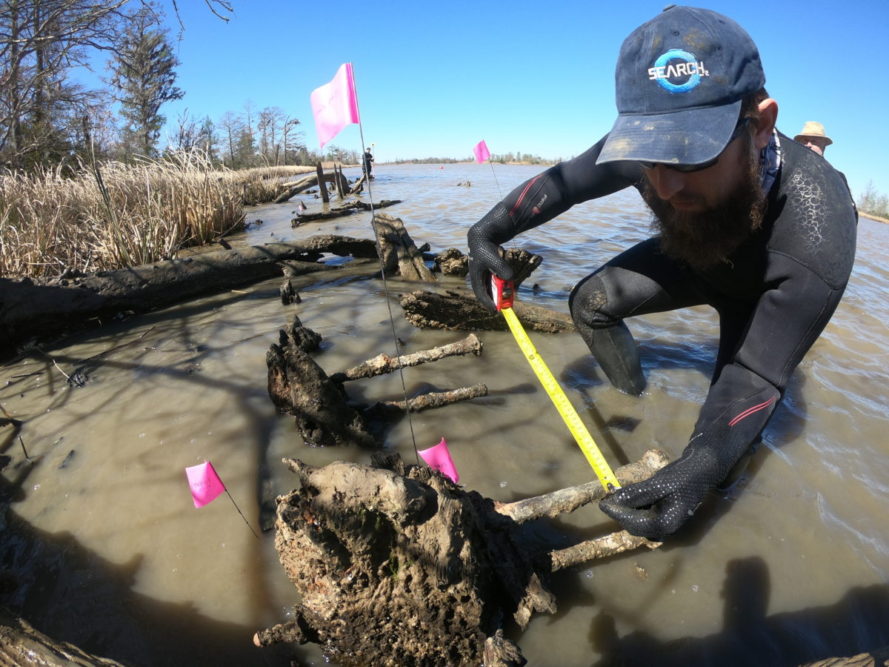 Yesterday, the Alabama Historical Commission (AHC), in coordination with the National Park Service (NPS), the Smithsonian National Museum of African American History and Culture, (NMAAHC), and SEARCH, Inc., announced it had completed the investigation of the shipwreck remains discovered in January 2018 in Baldwin County, Alabama.

In collaboration with the Washington-DC based Slave Wrecks Project, one goal of the study was to determine if the vessel is, in fact, the Clotilda, the last known ship to bring enslaved Africans to the United States.

Based on preliminary research and two days of field work, AHC is confident that the wreck was not the Clotilda.

The University of West Florida was part of the team of experts that examined and documented the Twelvemile Island Wreck Site on last Thursday and Friday at the request of and under the supervision of the Alabama Historical Commission.

The team employed high precision GPS, total station, photodocumentation, and measured drawings as well as field observations. The work was done through scuba diving, limited hand excavation and shallow water archaeological inspection. Wood samples were collected from a variety of exposed areas on the wreck.

The experts determined the wreck was not the slave ship for following reasons:

 Clotilda was 86 feet long while the length of the Twelvemile Island Wreck is 158 feet, 5 inches.

 The interior “depth” inside Clotilda was 6 feet, 11 inches while the interior depth of the Twelvemile Island Wreck is too deeply buried in the mud to measure completely but is at least 10 feet deep based on the amount of the bow structure remaining onsite.

 The size of timbers on the wreck is larger than those that were used to build a vessel the size of Clotilda. For example, the frames, or “ribs,” are 10 by 10 inches and the hull planks are 2 inches thick. Clotilda would have frames 2 inches smaller and planks ½ inch thinner.

 Clotilda had 2 masts. The size of the Twelvemile Island Wreck is too large for a 2 masted rig, which originally had 3 masts.

 The Twelvemile Island Wreck has flat iron reinforcing the hull, which is commonly found on larger wooden vessels built from the 1850s through the early 1920s. This timeframe is after the construction of Clotilda.

 A large portion of the upper bow of the Twelvemile Island Wreck is buried in mud on the shoreline. The condition of the wood indicates this wreck was largely an intact vessel that was abandoned on the shore. It slowly deteriorated with marine organisms eating the wood above the mud until heavier parts of the hull collapsed.

 Clotilda was burned and then sank. There is no definitive evidence of burning on the Twelvemile Island Wreck. The damage from small marine organisms that eat wood can look similar to fire damage. Our team excavated part of the site to expose areas of the ship to examine the damage. Undamaged sections of the wreck show the damage was confined to the waterline area only, whereas a fire would have damaged or destroyed the hull above the waterline.

In summary, the Twelvemile Island Wreck is too long, the timbers are too large, timber known to have been used to build Clotilda was not seen, and the there is no definitive evidence for burning.

“The discovery and first examination of the wreck by Ben Raines and our colleagues at the University of West Florida and the media stories that followed have powerfully reconnected the story of Clotilda to a national and international audience,” said Lisa D. Jones, Executive Director of the AHC.

“It shares a story with profound meaning in Alabama, and especially to the descendant community of Africatown. While the follow up investigation of the Twelvemile Island Wreck has found that this wreck is not Clotilda, its discovery and the attention paid to it will be the start of a renewed effort to find Clotilda.”

However, the discovery of the wreck may inspire additional searches of the Mobile River.

“We believe that a comprehensive survey of the area with a range of modern technology, followed by an examination of each wreck encountered by knowledgeable professionals will be the best means to find the physical remains of Clotilda. The archaeological team will continue to make ourselves available to answer questions from the community of Africatown and the citizens of Alabama.”