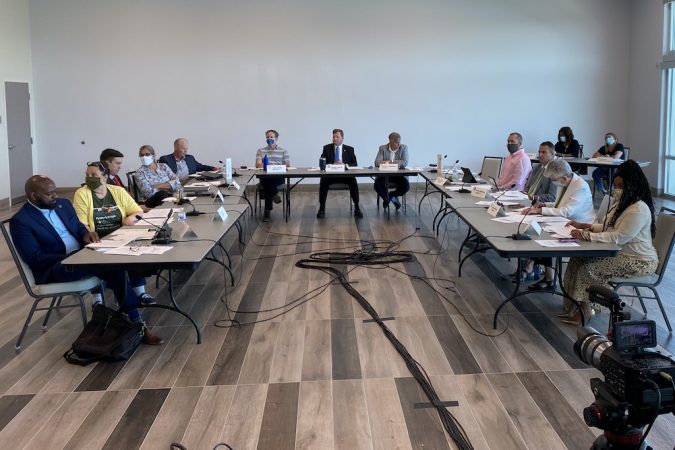 Escambia County and the city of Pensacola leaders held a joint meeting this week to discuss a few items of mutual interest. Chief among the topics on the table during the May 17 meeting at the Bayview Community Center was homelessness and how best to address it, but discussions also included potentially acquiring the Pensacola Shipyards in an attempt to secure additional public, working-waterfront property, as well as inside-baseball considerations concerning library facility operations.

The city-county joint meeting is a somewhat rare affair. And, in the past, the sessions have at times seemed more like showdowns. But, the occasions are useful due to the vast swaths of overlapping interests the two parties hold. As Pensacola City Councilwoman Jennifer Brahier pointed out during the discussion regarding the libraries, it’s a collaboration that both city and county residents appreciate.

“They’re looking for us working together more, not less,” she said. “They want to see more of this.”

Finding a Home for Homelessness

Homelessness is nothing new in Pensacola or Escambia County, but the issue is worsening.

“The other day, someone said, ‘How would you define where you’re at?’ And I said, ‘You’re at the edge of crisis about ready to go over the hill. I mean, you’re at 50 miles per hour aiming for the cliff right now,” Robert Marbut described the local landscape to government officials.

Marbut was former president Donald Trump’s homeless czar and, though he has his critics, is considered an expert in the field. A few years ago, he worked with the city to develop a plan to address the issues surrounding homelessness and is now doing so again, with a presentation scheduled with the city council next week.

“You all are starting to get big-time city problems,” Marbut said, noting an uptick in the regional homeless population in recent years. “My prediction is they’re not going away; they’re already coming.”

Marbut — who spoke on this topic along with the heads of local homeless service organizations — described how an increase in an area’s population could lead to a more violent environment for the area’s homeless encampments and in the community itself and also an increase in local costs associated with emergency and medical service for the homeless community.

Marbut suggested establishing a service hub facility and a kitchen-dining facility to serve the homeless community in proximity to each other — something Pensacola and Escambia are partnering on — and pointed toward a longer-term solution, where one site would host services, a kitchen and residential facilities.

“Ideally, you want to locate the services, the feeding and housing together. Ideally, you want to put all three of those in one place, in a holistic — because you get a higher success rate, you get a lower negative footprint, and so there’s a lot of good that happens when you do that together,” Marbut said.

The consultant even offered up one potential property on the market that might fit the bill: 1750 North Palafox.

“Someplace like 1750, the old state hospital that turned into the health department and such on Palafox,” Marbut said. “That’s sort of the homerun. You know, it’d take longer to develop; there’s a lot of challenges with that building, but that’s one place you could do all three in one location.”

Some city officials, who will hear from Marbut again next week, seemed to like this concept, with Councilwoman Ann Hill describing 1750 as “an amazing building with all kinds of potential” and “a perfect location.”

“I don’t believe everything is perfect, but it begins to move us down the line,” Mayor Robinson said of local government’s currently unfolding plan to address the concerns of the homeless community.

Public, working waterfront is growing increasingly rare. One such area in the local region, Pensacola Shipyards, is on the market, and Pensacola and Escambia officials are considering snapping it up.

The Pensacola Shipyards property is 76 acres located on Bayou Chico. In addition to traditional day-to-day operations, the site has been utilized by outfits such as Skanska, the company still working on the Pensacola Bay bridge, and BP, during its 2010 oil spill clean-up operations.

If purchased by local governments, potential uses for the waterfront would be a hurricane-haul out area for over 100 vessels and a public boat ramp. The site would also come into play during the county’s restoration efforts in Bayou Chico.

The shipyards property is running about $50 million. Officials from both the city and county agreed that the money needed to purchase the site would need to come from irregular sources, such as from Triumph Gulf Coast, the entity tasked with distributing a portion of oil-spill penalty fines.

“It would have to be something outside of our normal-everyday,” Mayor Robinson said of securing the funds.

“I think it’s worth talking about and pursuing,” said Councilwoman Sherri Myers.

Commissioner Doug Underhill voiced some concerns that there would be attempts to flip the working waterfront into something a bit splashier.

“I want to put a bow in something as we look at this as a Florida working waterway. The greatest travesty that could happen to this property would be for it to become a resort, condo, shopping center, convention center, anything like that,” Underhill said. “So, I would hope that nobody is thinking fantasy thoughts like that, and if they are, just do a little research on what phase one and phase two environmental would look like. This is industrial property; this shit’ll always be industrial property, and anybody thinking any other way is really riding a unicorn to work tomorrow.”

In 2013, Escambia County took over operations of the West Florida Public Library System from the city of Pensacola and established a county-wide tax to fund it.

“I thought that was one of the better moves for the library system,” said Mayor Robinson, who was an Escambia County commissioner at the time of the deal.

Except for one thing: the city held on to the three library facilities — the physical properties — within its boundaries. During its joint meeting, city and county officials discussed potentially shuffling the properties, or at least two of them, and the maintenance and upkeep of those facilities, over to the county as well.

“I think this is a good workable situation. It’s a county-wide system,” Mayor Robinson said. “I think it’d be better to get all the assets in the system so it could work properly.”

The mayor is a big proponent of shifting two of the city’s library facilities — the relatively recently built Spring Street facility and the Tyron Branch — over to the county. The city’s third library facility at the Legion Field Neighborhood Resource Center would remain under municipal control since it houses more than the library.

But not everyone with the city is jumping on board with this concept right away. District 6 Councilwoman Ann Hill, for one, appeared a bit hesitant to offload the downtown facility.

“It’s very much considered ‘our library,’ and I would hesitate giving it to the county,” Hill said, stressing a sense of ownership within the municipal community.

“We already operate it and handle everything inside; it’s just the four walls,” he said.
But District 2 Commissioner Doug Underhill — also expressing concerns about impacts such a move would have on the county budget — said he understood the councilwoman’s feelings.

“I wouldn’t want to step on those toes for the sake of being a little bit more efficient,” Underhill said.

In the end, city council members decided to discuss the issue in the future, with the county tabling its discussion until after that time. But, as District 3 Commissioner Lumon May pointed out, the decision about which governmental entity oversees facility operations at the Spring Street and Tyron Branch libraries — a detail not too many citizens will likely notice — essentially rest with the city, as the county is unlikely to refuse to take on the facilities if forced to do so.

“Our position will be a reactionary position because if they decide not to pursue a lease, we’re going to provide a library service,” May said. “So, quite frankly, it’s in the hands of the city council.”