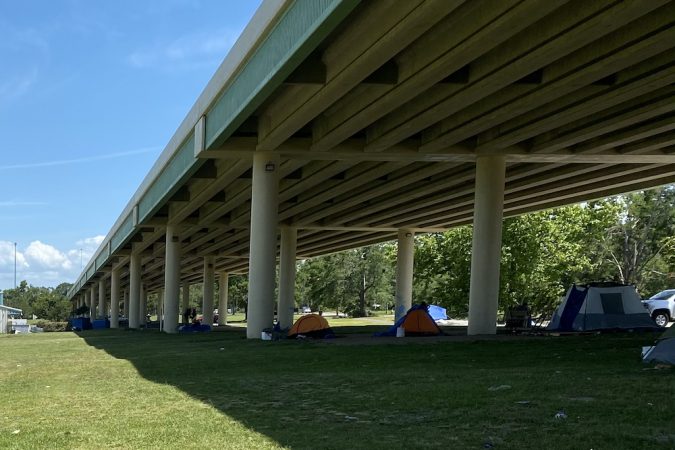 The Homeless Reduction Task Force of Northwest Florida presented a report to the Pensacola City Council Monday on how best to spend $3 million in federal American Rescue Plan Act funds to address the issue of homelessness in the area. The task force recommended investing the bulk of the funds — previously allocated for this issue — with already existing service organizations, and also putting some towards new initiatives, such as so-called ‘pallet shelters’

As Blair Castro, a contractor with the task force, explained, the group’s recommendations are “not reinventing the wheel, but streamlining everything we already have.”

“Keep in mind that this is a process, it involves system change and it does not happen overnight,” Castro said, cautioning that any actions would take time to have a positive effect.

This is not the first time city officials have attempted to address the issue of homelessness, though past attempts have ranged from tone deaf to ineffective. This time, a solution is being sought as both the coronavirus, housing crisis and shelter shortage have exacerbated many of the issues surrounding homelessness.

For the past eight months, the homeless task force has researched this issue — assessing community shortfalls in needs, and trying to get a better idea of the homeless community’s needs in general — and its resulting report is inspiring confidence in Lawrence Powell, the city’s neighborhoods administrator.

“Today for me is monumental, because I think it’s going to offer for us some real solutions and recommendations,” Powell said.

In introducing council to the task force’s presentation, Powell also alluded to some obvious context: the city currently has a moratorium on evicting a growing homeless encampment from public property beneath a stretch of the I-110 interstate due to both the coronavirus and lack of available shelter space. The administrator said that the group’s plan should be seen as addressing both the community encamped there, as well as nearby residents who were growing weary of the situation.

Connie Bookman, a task force leader and executive director of Pathways for Change, told council that, taken as a whole, the recommendations outlined in the group’s report sought to create a culture of engagement rather than one of enablement.

“So, all of this is going to raise up our people experiencing homelessness and give them a voice, give them an opportunity to have the life they never imagined,” Bookman said. “So, the voices in their head saying, ‘you’re never going to amount to anything,’ are going to be extinguished. We are going to empower them with these recommendations.”

The homeless task force’s recommendations — accounting for all but about half a million dollars of the city’s allocated AARPA funding — are as follows:

— Provide $50,000 annually, for a two year period, to a collective of local organizations serving the homeless. The organizations are the Alford Washburn Center, Bright Bridge Ministries, Children’s Home Society, HER Foundation and Family Promise. This money, totaling $500,000, will support the organization’s efforts and also fund social workers, as well as interns to work with members of the homeless community.

— $400,000 to the Waterfront Rescue Mission to fund 10 medical respite beds for homeless people recovering from a health issue. The funds would also cover mental health services on site for three years.

— Canopy of Hope, a new residential facility that will house 84 women, can fund a social worker and three interns — as well as cover associated construction costs — for three years for $262,300.

— Lakeview Mobile Response Behavioral Health Team is up for $500,000, which would fund various efforts, including a team of case managers to visit local encampments and serve 200 people per month.

— REAP (Reentry Alliance of Pensacola) is requesting $668,249 to fund a facility for women and families, as well as a campground. The funds would also cover interns and management costs.

As city council member were only presented with the task force’s recommendation a day ahead of the presentation, President Jared Moore noted that no decision would be made at this time — “I don’t think we can do anything more than say thank you for keeping us appraised and updating us” — but said he’d be interested to see how much funding Escambia County would be kick toward the effort of addressing homelessness.

“Is the county participating in any way?” Moore asked.

“We are on the way to the county. We wanted to get this buttoned up and have a clear plan and it’ll be so easy then to present to them,” Bookman told him. “I can’t imagine they wouldn’t.”