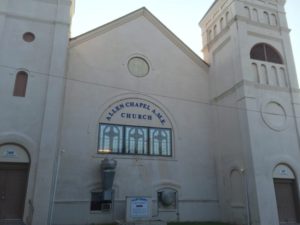 A sanctuary is a sacred place, a safe haven from the troubles of the world, somewhere that allows believers to worship and commune with God. For the faithful, a church sanctuary is the house of God.

Psalm 27:4
One thing I ask from the Lord, this only do I seek: that I may dwell in the house of the Lord all the days of my life, to gaze on the beauty of the Lord and to seek him in his temple

For 13 centuries, churches in England, by law, were sacred places where fugitives could seek refuge, immune from arrests. The fugitive had to come unarmed and had not committed any sacrilege. Anyone laying hands on a fugitive in a cathedral or abbey was subject to a fine.

King James I abolished churches as sanctuaries in 1623, but the concept never went away, especially among Christians.

In “The Hunchback of Notre Dame,” Quasimodo, the half-blind hunchback bell-ringer of Notre Dame, saves Esmeralda from the gallows by swinging down on a bell rope of the cathedral and carrying her off to the church under the law of sanctuary, protecting her from arrest.

During the 1980s, 440 U.S. cities declared themselves “sanctuary cities” for people fleeing the civil wars in Central America.

In 2007, Iranian refugee Shahla Valadi was granted asylum in Norway after spending seven years in church sanctuary after the initial denial of asylum.

This weekend, we learned that the concept of a church being a sanctuary is not sacred to the Pensacola Police Department when an officer entered Allen Chapel AME Church, little more than block from the police station, to take custody of a child during the Sunday service.

The video of the confrontation has gone viral, over 135,000 views as of yesterday morning. It shows a female officer, hand on her holstered gun, trying to coax a frightened child out of a pew. The pastor, who is the child’s grandfather, repeatedly asks the officer to wait outside. Parishioners ask her to wait until the service is completed. See video below.

Pensacola Police Chief David Alexander said, in a press release, that the officer properly did her job. The child’s father had gone to the police station and showed court documentation ordering the return of the child to his custody. The officer went to the church and asked several adults to retrieve the child during the service. When they failed to do so, she interrupted the service to get the child.

However, was the child in danger? Did the sight of an officer, hand on her gun, comfort or frighten the child? What was the harm of waiting until the service was completed?

Will police officers interrupt other Sunday services in the future?

How sacred are churches in the eyes of Pensacola’s city government?

On the city’s “Transparency” page, Mayor Ashton Hayward has said that he is willing to fight for the cross on display at Bayview Park.

“We want to respect all religions without showing preference to any,” he said. “Personally, I hope there is always a place for religion in the public square.”

Will the mayor ask his officers to show the same respect inside churches in his city?