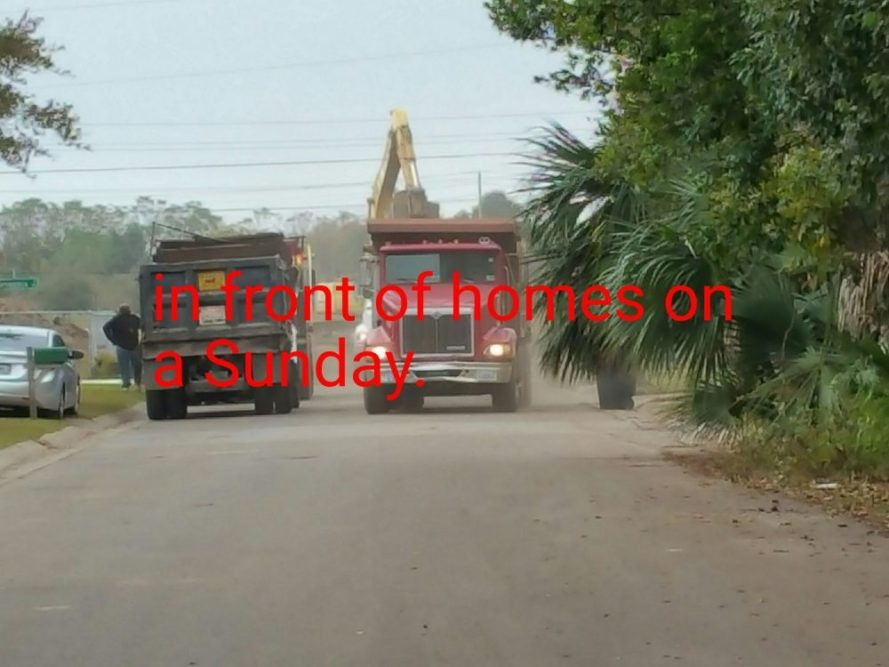 Community activist Dr. Gloria Horning summed her feelings about what is happening in the Tanyards neighborhood only two blocks from Pensacola City Hall in four words: “It just never ends.”

The “it” is environmental racism.

The Tanyards is one of the city’s oldest neighborhoods that runs between Main and Garden streets from City Hall to the city limits along Bayou Chico. For decades, it was home to the odiferous Main Street Sewage Treatment Plant and toxic Escambia County Mosquito Treatment Facility.

Today, it’s the site of the City of Pensacola’s largest stormwater project – Government Street Regional Stormwater Pond at Corinne Jones Park. The project will eventually look like the Admiral Mason Pond on Bayfront Parkway but has been a disaster for the businesses and residents in the Tanyards.

“I’ve only been there a couple of months, and my head is spinning from everything I’m smelling and seeing in that community,” said Tanyard resident Dr. Horning on “Pensacola Speaks” yesterday. “I’ve been speaking with the Tanyard Homeowners Association and others in the neighborhood, and one of the big issues was all the dust from the trucks, and I called Code Enforcement, and they said, ‘Well there’s nothing we can do about that. It’ll rain.’ And I said, ‘Well actually you can, you know put sprinkler systems up, that would help.'”

Dr. Horning is no stranger to dealing with government bureaucrats. She helped organize the Wedgewood and Rolling Hills neighborhoods to get DEP to shutdown the Rolling Hills dump. Read “A Shame Before God.”

“I’d been documenting some things and asking questions because I was going to ask about some of these things including–there’s no fencing around these huge holes, and children are playing in them. If they get stuck there’s nothing, nobody would hear them, because there’s these two large diesel running pumps pulling the water out, and then putting them in these water holding tanks and then, of course, tankers come and empty it out. Those, I don’t know where they’re taking the water. So, it’s 18-wheelers constantly in there. Then there’s these two diesel pumps going 24 seven. I didn’t know what the noise was for the longest time.”

According to Horning, things at the Government Street work site got worse this past Sunday with dump trucks showed up in the neighborhood.

“Sunday I was out and about, and all of a sudden I see a line of dump trucks on Donaldson and Government, all waiting to go into the hole,” she said.

“On construction sites, and this includes landfills, you can’t work on holidays, you can work Saturday until three, and nothing on Sunday unless it’s an emergency, you know if we had a hurricane or something like that. And then I drive up and I see all this stuff going on, and a young man comes by and I said, ‘What’s going on?’ He says, ‘Oh, we’re just digging this out.’ I said, “You know you’re not allowed to work on Sunday?” And he says, ‘Uh-uh.’ And I said, ‘Yeah.'”

Horning said she called the City of Pensacola 3-1-1 service to report the incident and heard nothing back from city officials. She called Commissioner Lumon May and City Councilwoman Sherri Myers, and both returned her calls.

“And this family had a big gathering going on in their yard on Donaldson, and there were these dump trucks running on diesel just idling waiting for their turn,” Horning shared.

Dr. Horning said making matters worse was she has discovered the dirt was being hauled to the Shortleaf borrow pit in the Wedgewood Community.

“Now this is contaminated dirt that they’re putting in an un-lined and un-permitted site, in Wedgewood, of course, you know, and I’m just taken aback,” she said. “Today I had some Florida State University students with me, they’re doing some environmental justice stories in the Panhandle, and I said ‘There’s all the trucks,’ and they were all lined up in front of Shortleaf, ready to go in to dump.”

When asked if Shortleaf was permitted to take the dirt from Government Street site, Dr. Horning said, “And I’m looking at their permit, and they do not have permission to take any clearing debris, which that is.”

She would like to see Mayor Ashton Hayward and his staff get more involved in policing its stormwater project.

“There’s lots of mitigation they could be doing. Since the park is gone, the kids are playing in the street, and they’re playing in these big holes…Not knowing that they’re contaminated, because there are no signs that say contamination. They only say ‘construction site.'”

Dr. Horning added, “And no one seems to care, and the other issue that I spoke with three residents yesterday, they said, ‘You oughta see all the rats.'”

Inweekly is following up on this story. We have calls into the City of Pensacola and Escambia County. Dr. Horning has reached out to DEP for help.