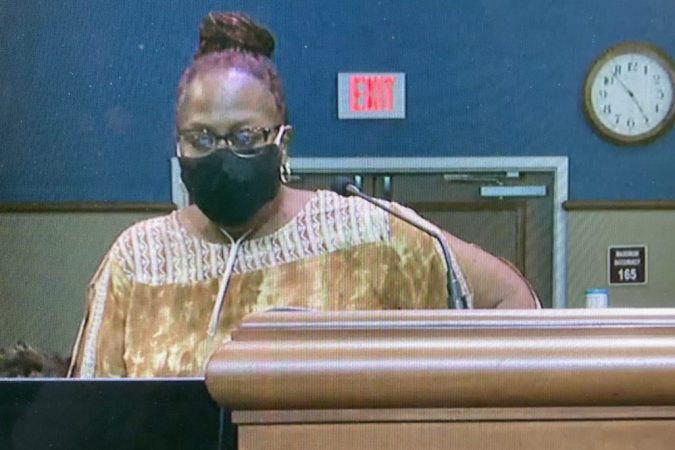 No life appears to be more disposable to the county’s HR than an older Black woman who worked 25 years for the transit system, been hospitalized twice because of COVID, and now needs an oxygen tank to breathe.

Escambia County has received millions of federal dollars to cope with the pandemic and to help citizens, businesses and its employees impacted by the deadly virus. Yet, the county HR sent Gwen McCormick a termination letter in mid-March and letting her know that her health insurance would be cancelled.

During commission’s public forum on June 3, Ms. McCormick walked slowly, gingerly to the podium with her oxygen tank in tow, seeking compassion.

Out of breathe and wearing her mask, she pleaded her case.

“I was told that I would have COBRA insurance, so I could continue trying to get better so I can get back to work,” Ms. McCormick said. “I went to the pharmacy yesterday to get my prescription. They said my insurance was canceled, so I need to know what’s going on with that.”

Commissioner Lumon May was furious that HR director Jana Still let this happen. He asked ECAT director Tonya Ellis, “Has staff not been meeting with Ms. McCormick? I thought that that was the direction to meet with her, to find some type of resolution.”

Ms. McCormick said, “I haven’t heard from her in a while.”

Assistant Administrator Debbie Bowers, who was filling in for Administrator Janice Gilley, said, “Yes, I think Jana is in the back, and I’d like for her to come forward because she says she knows what happened with the insurance.”

Still told the commission that she had met with Ms. McCormick and Union president Mike Lowery twice.

“We did do an informal settlement, it was a recorded meeting as well, so they have the record of what was discussed in that meeting,” said Still.

“As soon as we were made aware of it, the provider was contacted. Ms. McCormick does have full insurance, will remain fully insured,” said Still. “And Robert will be following up with you again tomorrow to make sure that, to check on you and let you know there’s no action you need to take at this point.”

Still turned to Ms. McCormick who was struggling to breathe, and flippantly said, “Okay. So, I do apologize for that.”

Ms. McCormick humbly added, “Because I had to cancel an appointment today, ’cause I didn’t have any insurance.”

Her sister, Diane Harrison, addressed the commissioners and disputed Still’s claim that a settlement had been reached.

“I’m here speaking on behalf of my sister that I’m very concerned about,” she said. “Her health, nothing has been done. There hasn’t been a settlement regarding her situation.”

Harrison continued, “She was trying to get some medication, which she truly needs for her breathing and was told that her insurance had been canceled, you just heard that. She had an appointment today. She had to cancel that appointment. I am deeply concerned. What is going on here? Something needs to be done.”

Inweekly yesterday asked Mike Lowery, president of ATU Local 1395,  about Still’s version of Ms. McCormick’s grievance. He asserted the Still misrepresented the status to board. There was no informal settlement agreed upon and a settlement offer wasn’t made until Monday, June 7, four days after the meeting.

In other words, Still lied to board. Inweekly has requested all audio of the informal meetings with Ms. McCormick and any transcripts. We will publish them upon review.

Inweekly reporter Jeremy Morrison has tried to talk with Still, but she hasn’t returned his calls.

Lowery also doubts the cancellation of Gwen McCormick’s health insurance was due to an error at Blue Cross. He said, “HR didn’t do what they should have to keep Gwen’s insurance active. The department has very few processes in place.”

“Representing the meeting was me in person for the Union and Gwen McCormick and Maureen Gibson the two employees being represented,” he said. “ATU International VP Curtis Howard joined the meeting by Microsoft Teams. Representing Management in person was Tonya Ellis, Rodriques Kimbrough and Wesley Hall. Jana Still also participated by Microsoft Teams. Gerri Bell and Forest English participated as concerned citizens.”

Lowery said, “Ms. Still was nasty and spent most of her time defending herself and Ms. Gilley. Wesley Hall and Tonya Ellis cut Ms. Still off and finally worked with the Union to reach agreements on both situations.”

I doubt few taxpayers would be proud of how Ms. McCormick has been treated, forced to beg–while still suffering the effects of COVID– before the commissioners and county staff for her health care that can be paid for with federal dollars.

And it’s odd that Still felt compelled to defend Gilley during the June 7 meeting – which tells me that Gilley has an hand in Still’s decisions.