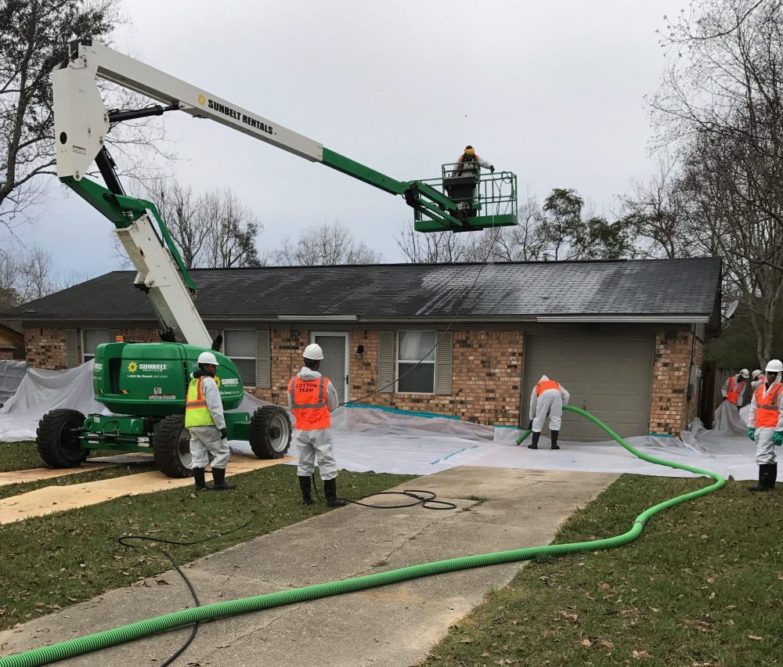 The media tour on Saturday morning consisted of a 65-minute driving tour to see how crews were cleaning homes in the Woodbury Circle neighborhood. IP, EPA, and recovery contractors outnumbered the handful of reporters, cameramen, and photographers nearly 4 to 1. The media was herded in a passenger van surrounded by black SUVs and pickup trucks.

The media was not allowed in any IP buildings or given a tour of the IP paper mill. They were kept under a brown pop-up on the edge of the parking lot.

Later in the day, IP held a “Community Open House,” which PNJ has reported consisted of residents talking to designated spokespersons at various tables under a white tent on the facility’s grounds. Some residents complained that they expected a town hall meeting.

Both the media and residents were assured that no long-term health effects are expected from the Jan. 22 mill explosion, which IP and Escambia County officials describe as the “Cantonment Digester Incident.

The explosion released “partially digested wood pulp material” in the surrounding area. Officials did not say how wide an area was impacted or long the cleanup would take.

The media was shown the process of how the homes in the Woodbury were being cleaned using pressure washers and vacuum trucks. The tires of all vehicles were being sprayed with water before leaving the neighborhood.

Stewart Geldersma, Director of Restoration for Cotton Global Disaster Solutions, said that his company arrived on site on Tuesday and had been working 24 hours a day on the cleanup. His crews were striving to clean each home within six hours, but some were taking an entire day to complete.

In its Sunday update, the Unified Command Team reported that cleanup is underway at approximately 33 percent of properties impacted by the disaster. Approximately 100 homes and businesses have experienced varying degrees of impact.

Residents who believe their property may have been affected by the material released and would like further information should call the Joint Information Center available 24/7 at 1-850-968-4208.