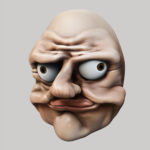 Zelda Williams shared her thoughts and emotions about her recently-deceased father, Robin Williams, on Twitter. Forbes reported that the tweets were “little more than a quotation and a brief message to her father.”

She was almost immediately attacked by what has become known as trolls–web thugs who post, often anonymously, hateful comments on on social networks like Facebook and Twitter. NY Times Tech columnist Farhad Manjoo wrote, “The term is vague precisely because trolls lurk in darkness; their aims are unclear, their intentions unknown, their affiliations mysterious.”

Sadly Manjoo has reached the conclusion that “unless social networks, media sites and governments come up with some innovative way of defeating online troublemakers, the digital world will never be free of the trolls’ collective sway.”

In the case of Zelda Williams, Twitter has intervened, according to Forbes.

“We will not tolerate abuse of this nature on Twitter,” Del Harvey, Twitter’s vice president of trust and safety, said in a statement. “We have suspended a number of accounts related to this issue for violating our rules and we are in the process of evaluating how we can further improve our policies to better handle tragic situations like this one. This includes expanding our policies regarding self-harm and private information, and improving support for family members of deceased users.”