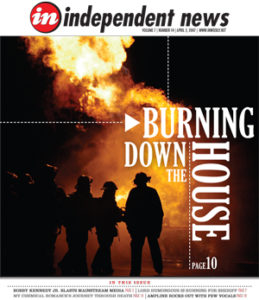 Escambia County has struggled with how to provide fire protection for years. The battles between the volunteers and firefighters union have been epic and are going on still today.

Burning Down The House

If your house catches fire, will Escambia County volunteer firefighters save your house? Save you?

The union, which is made up of the county’s approximately 62 full-time, paid firefighters, is charging that volunteer firefighters and their departments are stealing money from taxpayers, are lacking the necessary training to provide county residents adequate fire protection and are creating a hostile and unsafe working environment for full-time firefighters.

The Independent News has learned that the Escambia County Clerk of the Circuit Court and Comptroller began an audit of possible illegal payments made to volunteer firefighters. The audit is scheduled for completion by July and, if violations are found, enforcement actions will be decided then.

In addition, a survey of the estimated 400 volunteer firefighters finds that only 105 of them have met the Florida law mandating 160 hours training (also known as Firefighter 1 Certification) to fight fires, reports Escambia County Fire Rescue Chief Ken Perkins.

IN requested the public records two weeks ago but has not received the documents yet.

Perkins says county officials are checking into whether the volunteer fire departmentsâ€”which are separate, autonomous agenciesâ€”breached their current five-year contract with the county, which ends in October. He refused to elaborate.

“This puts everyone at risk during a fire when you don’t have adequate personnel. I’ll leave it at that,” Perkins says.

Escambia County Administrator George Touart also declined comment through a county spokeswoman. Touart says he has nothing to say about fire service until the 15-member Fire Services Citizens Advisory Committee, which was appointed by the Escambia County Commission in January, completes its review and recommendations in July, according to spokeswoman Sonya Daniel.

The union says in a statement: “These violations which will be cited are not isolated and are in fact representative of a problem that encompasses many of the Volunteer Fire Departments in Escambia County. These repeated violations generate an unsafe work environment for county employees and deny the public the fire services they pay for and deserve.”

Meanwhile, a Feb. 26 letter by Escambia County Assistant Administrator Willie Taylor, who met with union members about their concerns, says county officials are concerned about training. But the letter only addresses the Bellview Volunteer Fireman’s Association and Taylor makes it clear twice that the county has no power to administer discipline or corrective action.Taylor failed to return a call to the IN seeking comment for this story.

“Maybe they’ll see something we don’t see,” he says. “We can all work better together in a lot of areas. We all have a common goal to serve the citizens. We’re here to do the job.”

Steve McNair, the Escambia County Volunteer Firefighters Association president and Beulah’s volunteer fire chief, says volunteers are better trained than ever before. He says his department has more experience than any other in the county.

“We continue to have to improve,” he says. “The state standards keep going up and up and up. Plus, you have changes all the time with new ways to do things, new technology and new vehicles.”

“Just because you get a paycheck doesn’t mean you’re great,” he says. “A lot of volunteers feel like they’re treated like second class citizens. There has got to be mutual respect on both sides and until that happens, we have a long road to hoe.”

Michelle Schmitz says a big problem she sees is the fact that the county’s fire chief, Perkins, has no authority over the volunteer departments or volunteer firefighters. She’s a Fire Services Citizens Advisory Committee member appointed by District 4 Escambia County Commissioner Grover Robinson.

“I cannot imagine running a business the way the fire service is run,” she says. “There is a CEO (Perkins), who has absolutely no, or very little, authority to organize and coordinate to improve fire services provided to the citizens.”

However, it’s the firefighter union’s allegations that are the most serious leveled at the county’s current fire-rescue operations.

The new union asserts there are widespread illegal payments made by the volunteer departments to volunteer firefighters.

If a firefighter lacks Firefighter 1 training, the most he can receive is a $75 stipend. The amount of the stipends are based on training, rank and how many calls a volunteer answers. Also under Escambia County’s program, only a certified volunteer firefighter can hold a rank, like lieutenant or captain.

However, monthly stipend reports for December, for example, show violations.

For instance, in the Myrtle Grove Volunteer Fire Department under Chief Mary Weaver, at least three firefighters without certification earned at least $180. In fact, the threeâ€”Capt. Trenton Williams, Lt. Timothy Hodges and firefighter Donald Snock–received $670 instead of the $225 they were entitled to earn, the union alleges.

And in one of the allegedly biggest stipend frauds uncovered by the union, the Century Volunteer Fire Department made $2,640 in payments in December when only Assistant Chief David Adams was entitled to a full stipend, since he’s the only one of 17 volunteers who is certified. Adams earned $345 for the month records show.

Assuming every volunteer firefighter in Century qualified for the $75 stipend, the total payment would be $1,545, or $1,095 less than the county was billed.

So, in just three of the county’s 18 fire stations, $1,955 in alleged illegal payments were made in the month of December.

If illegal stipend payments are widespread, as the union claims, that means the fraudulent payments footed by county taxpayers could roughly land between $100,000 and $200,000 a year.

Lisa Bernau, the clerk’s chief deputy, confirms an audit began in mid-March of the volunteer fire departments’ finances. She says the clerk’s office is still considering how many years to go back and examine.

“We’re looking at stipends as well as other areas of concern,” she says. “Depending on our findings, we will decide how to address the issue.”

McNair says the training is a burden on volunteers, who don’t have time to spare.

“They keep putting more mandates out there and the state is making it tougher on volunteers,” he says.

But Whitfield says, “I’m a chief who believes in training.”

The passing rate for Firefighter 1 is about 80 percent, the State Fire Marshal reports.

But in Escambia County only about a quarter of the 400 volunteer firefighters have the certification.

“It’s a touchy issue,” Perkins admits. “We have to maintain adequate training of our volunteers out there. That’s not a Chief Perkins law that’s a state law.”

Despite not having the proper training, Escambia County volunteer firefighters are entering structure fires, running fire scenes and disobeying orders by more trained career firefighters, the professional firefighters union says. The violations run, not only against state law, but even against nationally accepted standards developed by the National Fire Protection Association.

The county’s firefighters union cites more than a dozen incidents by report number in the month of February alone where volunteer firefighters allegedly ran afoul of county, state and national laws and standards.

In a gas leak incident on Feb. 9 in the 4000 block of Jackson Street, West Pensacola Capt. John Crispin ordered volunteers who responded to “mask up and check out the leak,” even though five of the six lacked the required certification.

In addition, West Pensacola, which has among the most total structure fire calls in the county with 155 in 2006, sent only one certified volunteer firefighter or less to 11 blazes in February.

To illustrate the tension between volunteer and career firefighters, one only has to look at an October fire scene in the 2100 block of Antilles Drive.

The Antilles incident reveals: it took 13 minutes for the first volunteer engine company to arrive; confusion among who was in charge at the scene; numerous volunteer fire chiefs responded but none contributed to the suppression of the fire or to the command of the activities; numerous volunteers without any protective equipment; and Chief Weaver stated: “We have testosterone-driven paid firemen.”

Whitfield maintains, though, that the current relationship and communication between volunteer and career firefighters is a good one.

“That (Antilles incident) was not something to be proud of,” he says. “It wasn’t good for career of volunteer. But if we treat each other with mutual respect we can operate a lot smoother.”

However, volunteer chiefs McNair, Whitfield and Weaver say they’re not in favor of adding additional career firefighters. But they’ve admitted a manpower shortage and kicked off a drive to recruit more volunteers in July.

Also, McNair says he would be in favor of Escambia County’s Fire Chief having more authority over the volunteer departments if “the proper leadership was in place.”

Although McNair refused to elaborate further, several others take his comment to mean he favors putting one of the current volunteer fire chiefs in charge of Escambia County’s 18 fire stations. It’s reported that Ferry Pass’s Whitfield is maneuvering for the open Deputy Chief post under Perkins.

Commissioner Robinson says he’s convinced Perkins, or whoever is the county’s fire chief, should have ultimate authority over the fire-rescue operations.

“Why are we holding onto a system that doesn’t work?” Robinson asks. “I don’t know how to fight fires but I do see holes in our system and we have an obligation to every citizen and business to fix it.”

Weaver says Escambia County residents appear to her to be OK with an under-funded, understaffed fire-rescue service.

“The citizens of Escambia County foot the bill,” she says. “They all say they want services but when you tell them how much it costs, they get sticker shock and say, ‘Eeek! No, no, we don’t want that.'”

In 2003, residents’ rates jumped 50 percent to $75 a year, while commercial businesses pay about 2.5 cents a square foot. The Escambia County Fire Rescue budget is about $9.6 million annually.

That compares favorably to other Florida counties’ fire protection fees. For example, take Polk and Marion counties, which are similar in size and property value. Polk County residents pay $70 per year and commercial assessments range from $64 to $3,225. Marion County residents pay $72 for houses under 2,000 square feet, and assessments begin at $144 per year for commercial properties.

Some Fire Services Citizens Advisory Committee members are slated next week to visit the Polk and Marion fire departments. Both counties made fire protection a priority and Polk’s budget increased from $10 million annually in 2001 to $27 million annually currently with about 200 career firefighters. Marion County’s budget doubled from about $9 million to $18 million in the same period and it boasts 125 career firefighters.

Escambia County implemented a five-year plan in 2003 to improve its fire protection service after 21 fire deaths in a span of 18 months between 2001 and 2003.

The plan was supposed to add two new fire stations, one called Osceola near the corner of Massachusetts Avenue and Mobile Highway. Another was planned in Cantonment near the corner of Kingsfield Road and U.S. Highway 29. Both stations were supposed to be staffed with full-time, paid firefighers around the clock.

However, only the $1.1 million Osceola station, which is expected to be completed in July, is coming to fruition. It’s expected to help the Ensley and West Pensacola volunteer fire departments, which are the two stations with the most fire service calls in the county.

Besides the Brent station, career firefighters operate around the clock at Perdido Key and Pensacola Beach. Escambia County has five stations–”Molino, Century, Myrtle Grove, Bellview and Pleasant Grove–where career firefighters are on duty during the day between 7 a.m. and 4 p.m.

But of the 15,238 total calls in 2006, 66 percent of those came at nighttime or weekends, not daytime when the bulk of the paid firefighters are working.

“I don’t think we’re operating the best way,” Perkins says. “But we’re trying to keep pace as best we can and serve the county the best we can given the system and components we have.”