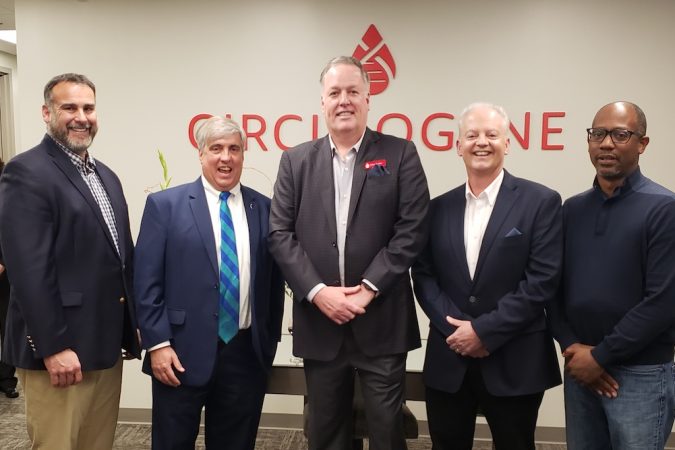 Inweekly recently interviewed Circulogene CEO Michael Mullen and FloridaWest CEO Scott Luth on how the company made its decision to open an office and lab in Pensacola.

He added, “I review almost every report after they go out. And every time we got a targeted hit, we were able to deliver that result within four or five days from the time the physicians drew the blood. It’s a game-changer.”

The patented process analyzes blood samples from late-stage, metastatic cancer patients. Mullin explained, “These tumors are growing, and then they’re also dying; they’re releasing genetic signals into the bloodstream. We attempt to pick those up and prepare them in a proprietary way when they come to our lab.”

He continued, “We try to find areas within certain targeted genes that are mutating and driving the cancer. We give that information to the oncologist very quickly at the front end of the disease to help stop the mutation and, in a lot of cases, lessen the impact on the healthy cells in the body.”

Luth shared with Inweekly the process to recruit Circulogene to Pensacola. He explained that attracting business to our area is competitive.

“Prospective companies are always comparing communities, not necessarily comparing one building or piece of property to other facilities and sites,” he said. “In this instance, what they were really doing was trying to figure out if this a community where we can be successful.”

The decision process can take anywhere from a year and a half to up to six to seven years for larger companies. Luth explained, “It is a big decision for these companies. They may only have one or two locations in their company history, and so for them, it’s a big decision of where can they be successful.”

Mullen told Inweekly that his team had targeted Florida for its expansion and had been looking at cities in South Florida. He said, “Florida’s the second largest state in terms of population and in terms of cancer, and it was strategically on our radar. Pensacola was a city that was clear to me that the leadership is committed to growing and creating high-paying jobs. In addition, it’s three and a half hours from our Birmingham facility.”

Mullen contacted Mayor Grover Robinson, who set up a meeting with Luth and his team. For FloridaWest, the goal of the meeting was to gather as much information about Circulogene as possible and find out what the company needed to be successful.

He continued, “And the primary reason for that is because they could set their lab up, and they could do testing anywhere. Mike needed to know if the community was going to allow Circulogene to have the quality of life to make it possible to retain and keep the talent that it needed.”

3 thoughts on “Inweekly: Art of the Deal”