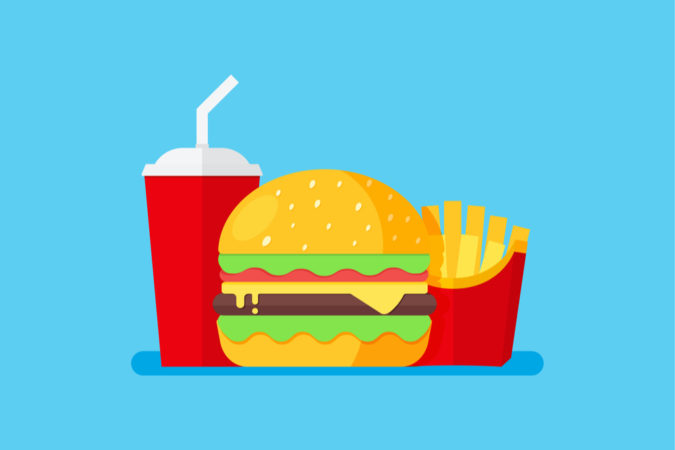 The number of  staff and/or residents in Escambia County assisted living facilities with COVID-19 has doubled to 16. Escambia County Emergency Management Director Eric Gilmore said this morning that DOH is sending a Level 1 team to help with ALFs. This is what Baptist CEO Mark Faulkner warned us about last week.

Today, the U.S. Department of Health and Human Services (HHS), through the Health Resources and Services Administration (HRSA), awarded $63,034,105 to 47 health centers in Florida as part of the U.S. response to the Coronavirus Disease 2019 (COVID-19) pandemic. Community Health Northwest Florida of Pensacola will receive $1.5 million.

Health center awardees in Florida may use these funds to help their communities detect coronavirus; prevent, diagnose, and treat COVID-19; and maintain or increase health capacity and staffing levels to address this public health emergency.

Escambia County Administrator Janice Gilley reiterated today at the virtual “Coffee with a Commissioner” that there are no positive COVID-19 cases in the Escambia County Jail.  Others aren’t as lucky.

COVID-19 in Blackwater River and other state prisons put inmates, families on edge

TALLAHASSEE — One of the last times Natausha Hunt spoke to her son, he begged her for help.

Hunt’s son, Gary Ford, is an inmate at Blackwater River Correctional Facility, a Florida Panhandle prison with 9 confirmed cases of COVID-19, the respiratory illness caused by the novel coronavirus.

In a telephone call with his mother on Friday, Ford, who has asthma, said he was coughing, felt feverish, and was afraid he had contracted the highly contagious virus, Hunt told The News Service of Florida.

“He called me panicking and scared, and said, ‘Momma, they are leaving us here to die,’ ” a sobbing Hunt said in a telephone interview on Tuesday.

Four inmates and 37 employees at 17 prisons and three probation offices throughout the state have tested positive for COVID-19 as of Tuesday afternoon, according to the Florida Department of Corrections.

The spread of the virus to inmates and prison workers has fueled panic among detainees and their loved ones. Even before COVID-19 showed up in the state’s prisons, corrections officials canceled face-to-face visitations, cutting off one of the ways families and friends can communicate with inmates.

Hunt said officials have kept her in the dark about her 28-year-old son’s situation at Blackwater, a private prison in Santa Rosa County operated by The Geo Group Inc. The prison has a maximum capacity of 2,000 inmates, according to the Florida Department of Corrections website. The four inmates in Florida who have tested positive for COVID-19 are all located at Blackwater.

Hunt said she began asking questions after Ford, who is serving six years in prison for aggravated assault, told her some prisoners at the Milton facility had complained about having chills or had shown signs of fever.

Hunt said she could hear coughing in the background as she spoke with her son on Friday. Ford told his mother he had been in quarantine for more than two weeks with dozens of other inmates at the prison, and that he and his dorm mates would remain in isolation for a total of 30 days.

A day after a frightened Ford asked his mother for help, corrections officials confirmed that an inmate at Blackwater had tested positive for COVID-19. By Monday afternoon, officials said four inmates and five correctional workers at the prison had been diagnosed with the virus.

On Tuesday, Ford told his mother that two inmates whose bunks are adjacent to his were tested for COVID-19. Although he has symptoms of the virus, Hunt said her son has not been tested.

The Department of Corrections declined to comment on Ford’s depiction of the situation at Blackwater, citing federal regulations protecting patients’ confidential health information.

But corrections officials maintain they are taking many measures to prevent the spread of the virus.

New inmates are placed in quarantine, the temperature of inmates who are in medical quarantine is taken twice daily, and inmates in the general population can ask questions and request a temperature check, the agency said in an email Wednesday morning.

Gov. Ron DeSantis’ administration, however, won’t reveal the number of inmates or workers who have been tested for COVID-19, or how many prisoners are in medical isolation due to the virus.

“I think the lack of information coming from the Florida Department of Corrections is very troubling. We know that once the virus is inside, it is very difficult to contain it and Floridians have a right to know what is happening to 95,000 people in the state,” Southern Poverty Law Center staff attorney Sumayya Saleh told the News Service on Tuesday.

Corrections officials say inmate testing is determined by a medical professional, who consults with the county health department.

The Santa Rosa County health department, which helps test inmates housed at Blackwater Correctional Facility and Santa Rosa Correctional Institution, is conducting random testing of staff and employees, according to Debbie Stilphen, a spokeswoman with the county agency.

“We are randomly sampling staff and inmates from different pods based on the number of specimen containers available,” Stilphen said in an email Tuesday.

Stilphen said the county has enough tests to meet the demand of symptomatic inmates at the two prisons.

“The reason we are doing the sampling is to find out who might need to be tested in the process of our investigation,” Stilphen said.

Department of Management Services Secretary Jonathan Satter, whose agency oversees contracts with the state’s private prison vendors, said this week that information about inmate testing is “something that we could probably gather over time.”

Satter insisted that the state agency and The Geo Group are working together to contain the spread of the virus.

DMS officials declined to comment on Ford’s account, again citing patients’ privacy protections. The agency said Tuesday that The Geo Group is “responsible for ensuring that every inmate receives adequate care, per the contract with DMS.”

The Boca Raton-based private prison company has referred questions about the coronavirus to the Department of Management Services. But in a prepared statement issued Tuesday evening, The Geo Group said the company is following state and federal guidelines for the treatment and reporting of COVID-19.

Corrections officials say inmates who have COVID-19 symptoms are placed in some type of medical isolation, which could vary depending on the health condition of the inmate.

“Medical isolation for an inmate could include being isolated alone in an infirmary or in a housing unit with other inmates who were also exposed to the virus,” Department of Corrections spokeswoman Michelle Glady said Tuesday.

Meanwhile, inmates and their loved ones across Florida are bracing for further outbreaks within the state prison system, which has 143 facilities, more than 24,000 employees and roughly 94,000 inmates.

David Denney, an inmate at South Florida Reception Center, told his mother last week that “everybody is on edge” at the Doral prison.

Inmates at the facility do not have access to gloves, hand sanitizer or cleaning supplies, Denney said in a recording of the telephone call provided to the News Service.

Denney, who is serving a two-year sentence for battery, also said inmates are extremely anxious because they know that two workers at the South Florida prison have tested positive for COVID-19.

“We don’t want to get sick because this is not the place to get sick. There are not enough respirators. There’s not enough anything. … It is going to be hell if we get sick,” he said. 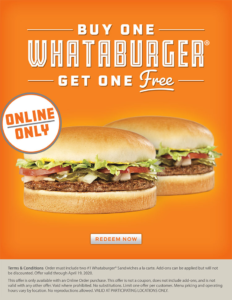 From Whataburger:  The easiest, most rewarding way to customize cravings just got even better. Today through April 19 at participating locations, customers can purchase one Whataburger online and get a second one free. Offer is redeemable online only.

Online ordering at Whataburger lets customers customize and save their favorite orders – not to mention save time with quick and convenient curbside pickup.

To redeem this offer, sign in to an existing Whataburger account or open a new account by downloading the free Whataburger App from the App Store or Google Play. You can also order online at Whataburger.com.