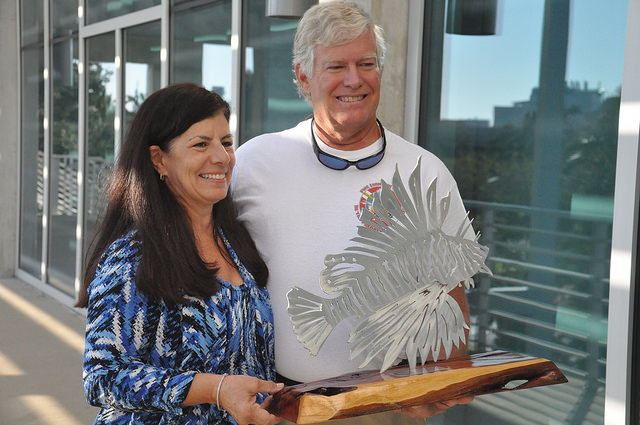 “Thanks to David and the tireless efforts of divers across the state, we are able to celebrate the removal of an amazing 111,000 lionfish so far this year; 37,000 of which were removed via recreational efforts,” said FWC Chairman Brian Yablonski. “This far exceeds our initial goal of 25,000 lionfish removed between May 2016 and May 2017 and we look forward to seeing what we can do to continue our battle against the invasive lionfish population.”

Garrett, of Volusia County, achieved the honor after removing a total of 3,324 lionfish during the 4.5-month long Lionfish Challenge.

“Every lionfish removed is a benefit to the native fish and ecosystem,” said Garrett, a Professional Association of Diving Instructors scuba instructor and retired Army major who also sells a lot of his catch commercially and runs a nonprofit lionfish removal organization. He will be featured on the cover of the January 2017 Saltwater Regulations Publication and will also receive a lifetime saltwater fishing license for his efforts.

Of the 111,000 lionfish reported removed since May, 16,609 were from the Lionfish Challenge program alone.

The Lionfish Challenge rewarded divers who removed 50 or more lionfish with incentives including a commemorative coin; a T-shirt; an additional spiny lobster per person, per day during the 2016 two-day sport season; and entry into a raffle where they had the chance to win prizes such as Neritic polespears, Zookeeper lionfish containment units, fuel cards, fishing licenses and dive tank refills.

A total of 95 people participated in the program from across Florida and the southeastern United States.

About half of the lionfish submitted to the Lionfish Challenge were also submitted to the Panhandle Pilot Program, which rewards divers for removing 100 or more lionfish from waters off Escambia through Franklin counties. This program will continue through May 19, 2017, or until all 130 cobia and red grouper tags allotted to this program are awarded. The first 10 persons or teams to remove 500 lionfish also qualify to name an artificial reef.

To learn more about how to participate in these and other programs, or to see who participated in the Lionfish Challenge, visit MyFWC.com/Lionfish.