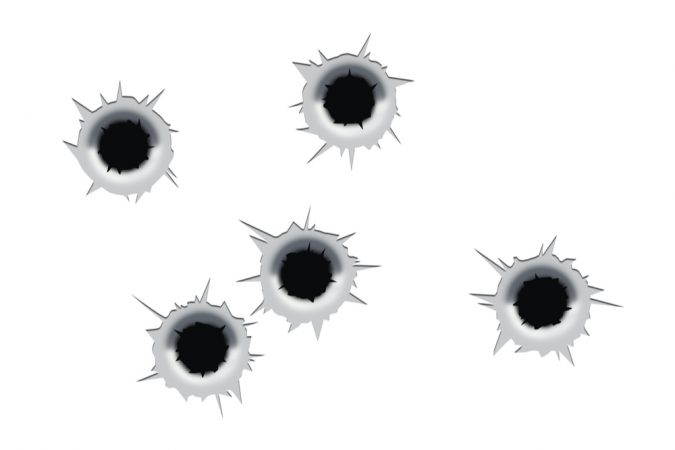 Other possible title: “This is not the Hassan you’re looking for”

The News Journal and WEAR TV have covered how a case of mistaken identity led to deputies shooting up – 14 bullet holes, according to WEAR – Blue Angel Groceries, 1550 E. Olive Road, in a SWAT call-out early Saturday, March 27. Fortunately no one was hurt.

The comedy of errors (or terrors) began at 3:50 a.m. Saturday when deputies found a suspicious vehicle behind the convenience store. The suspect fought with deputies, a deputy fired a shot and the suspect escaped on foot. Witnesses were questioned, including store owner Hassan Alissa and one Hassan Moorer.

Moorer had active warrants. Deputies returned to the store Saturday afternoon to find him. The clerk told them Hassan was in the backroom – but it was owner Hassan Alissa, not Hassan Moorer.

Hearing his name, Alissa thinks the store is being robbed and picks up a gun that he has a license to carry. Then all hell breaks loose.

Of course, ECSO issues no press release on the incident. The last press release issued by ECSO was around January 2016. Reporters have to track down Sheriff Chip Simmons for answers on Monday, and the agency is left defending itself on Facebook—the same place where cartoon cat Tom reminds people to lock their cars at night and the public gets updates on a kickball game.

And the sheriff sees nothing wrong with this?

I spoke with Chief Simmons.  This agency will start issuing press releases. Here is the first one:

On 3/27/2021 at 3:51 a.m., the ECSO responded to a call for a suspicious vehicle parked in the back lot of Blue Angel Groceries on Olive Road and Whitmire Road. When the deputy arrived, he located a suspect sleeping in his vehicle. The deputy observed a hand gun and numerous narcotics in plain sight on the floorboard between the suspect’s feet.

Deputies returned to the Blue Angel Grocery looking for Hassan Moorer and they were directed to the back of the open store by an employee. When deputies entered the building and announced their presence, they were met with an individual, who was not Hassan Moorer, pointing a firearm in their direction. Deputies fired at the individual and were able to secure the area.

The ECSO SWAT Team was activated and arrived on scene. The individual surrendered and there were no injuries. The investigation is still ongoing in reference to the firearm being pointed at the deputies. Per protocol, the deputies have been placed on administrative leave pending the outcome of the investigation.