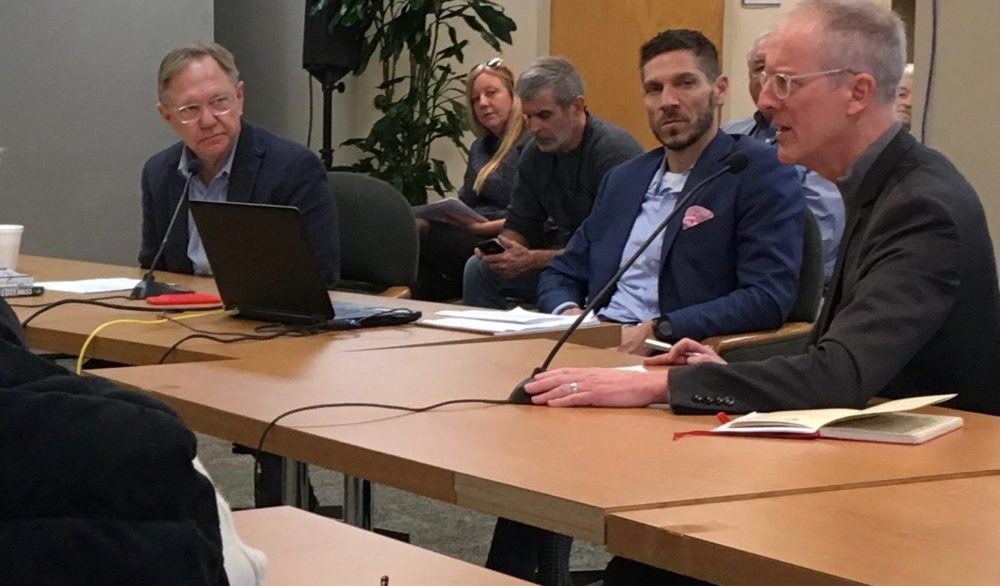 –Taking a moment to reflect following Thursday’s Pensacola City Council Workshop focused on future plans for the remaining properties at the Maritime Park as well as a whopping 19 acres across Main Street, Quint Studer said he was encouraged about the prospects of working with the city.

“Most of the things, privately, that we’ve been able to do, we’ve implemented. Where we’ve hit the wall ourselves is where we’ve tried to do public-private,” Studer said, adding that he was glad to see the council was responsive to working with him on this particular front. “We didn’t want to work on something, come in and have them say, ‘I don’t think so.’ I think we’re trying to learn, because I have not been very successful in public-private partnerships.”

Recently, the city of Pensacola granted Studer Properties an 18-month “option agreement” for the remaining seven parcels at Maritime Park, near Blue Wahoos Stadium, home of his minor league baseball team. During that time, the businessman and developer intends to draw up a master plan for both the park parcels as well as his nearby 19-acres that use to be home to ‘Old Stinky,’ ECUA’s wastewater facility.

During the council’s workshop, Studer detailed how he envisioned the process working. He described how the overall project represented a chance to draw the success of the downtown core westward.

“My whole goal, and I know your whole goal, is to go west of Palafox,” Studer told city council members.

Brought in to walk city council members through the process was Jeff Speck, a city planner who recently gave a presentation for the CivicCon series. The planner preaches New Urbanism and is the author of the book “Walkable City: How Downtown Can Save America, One Step at a Time,” as well as co-penning “Suburban Nation,” which The Wall Street Journal has called “the bible of urbanists.”

“It’s really astounding what’s been accomplished here,” Speck told council, saying he had visited Pensacola off and on and noticed marked progress in more recent years. “People have asked, ‘Have we turned the corner?’ I would say we’re at the corner. Particularly your downtown.”

The thoughtful development of the properties on the table, and even the area surrounding those properties — “a proper plan does not concern itself with who owns what, a proper plan looks at the whole area holistically” — was painted as the missing piece of Pensacola’s puzzle.

“This is the project that could help you turn the corner,” Speck said.

The planner talked about how one impediment to developing the types of projects he works on — ones which encourage a pedestrian-friendly area — are often existing ordinances and zoning.

Before signing onto work with Studer on the project to develop the properties, Speck said he wanted to get a “sense of appetite” from the city, to see if it was ready to have discussions about things like zoning changes.

City council members sounded plenty receptive to moving forward. Each expressed enthusiasm about the potential for developing a plan for the properties and willingness to find workaround to any obstacles in need be. They also noted some priorities, like creating tax revenue, maintaining public access to the waterfront and involving the public in the planning process.

Marina Khoury, a planner and partner at Duany Plater-Zyberk & Company, who was also brought in for the workshop and could work with Speck on the project, assured the council that the project would include ample public meetings.

“We really like to design in public,” Khoury said.

No firm plans or concepts were mentioned for the properties, and Studer said that he intended to conduct market research to better guide his team of planners. But Speck did tell council that any development should strive to bring more people to the area to live and work and visit.

“I think we share a goal for these properties to bring a lot of bodies downtown,” Speck said. “My goal would be the more the merrier.”

Several members of the public also offered input during the Nov. 29 workshop. They expressed concerns about preserving affordable housing in the area, and about incorporating bike lanes and addressing flooding and runoff issues. They said the area should be used to celebrate the area’s history, there was mention of the once-upon-a-time maritime museum. Someone suggested the properties be used as a giant city park.

After the city council workshop wrapped up, Studer said he was encouraged moving forward. He was glad the council seemed receptive to working with him in ensuring any development jived with the whole of downtown.

“I think probably the biggest hit today was the encouragement from the city council to take this plan all the way down Palafox,” Studer said.

The developer said he agreed with Speck about these properties — comprising a sizable chunk of developable land west of Palafox —and this masterplan process having the potential to help Pensacola “turn the corner.”

[pullquote]“Turning the corner looks like the fact that we all the sudden have projects that outside investors want to bring money into Pensacola,” – Quint Studer[/pullquote]

“Turning the corner looks like the fact that we all the sudden have projects that outside investors want to bring money into Pensacola,” Studer said, adding that much of the development in the area has traditionally been done by a handful of locals.

Studer’s current arrangement with the city comes after years of back-and-forth on various projects, after numerous municipal successes and frustrations. It also comes after the developer-philanthropist has expended much energy providing Pensacola with urban-tutorials via CivcCon.

Pensacola, particularly downtown, in no small part due to Studer’s involvement, has experienced an influx of energy in recent years with new developments and businesses being drawn to the city core. The developer thinks that such an atmosphere has given people a certain sense of optimism and confidence and desire — “people are enthusiastic” — to shoot for something special when it comes to developing the park properties and his 19-acres across Main Street.

It’s just taken a while since he first began this journey, before the park was the park and the smell of Old Stinky still lingered fresh in folks’ memories. But some things just take some time, he said.