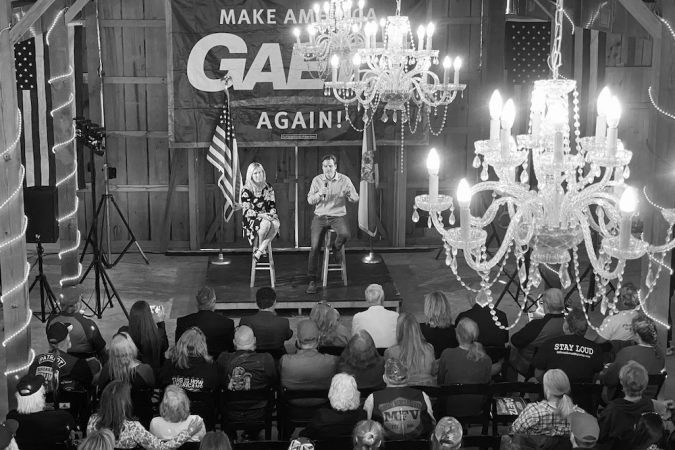 Gaetz, Greene Revel in the Fringe, Part 2
or, Some Leftover Observations From My Field Trip to the Kool-Aid Factory..

If Rep. Matt Gaetz (R-FL) and Rep. Marjorie Taylor Greene (R-GA) had a central message, a key takeaway over the course of their weekend appearances, it may well have been this: there’s an us and there’s a them, and we’re with you.

The ‘us’ in that equation would be the narrowly-defined, as Greene put it, “real Americans, who are patriotic and love our country,” while the ‘them’ would be everyone else up to and including, as Gaetz put it, the “purple-haired-genderless woketopian.”

“All of you are just like the great people back in my district in Georgia,” Greene assured the crowd assembled Saturday afternoon inside the Heaven Trail’s Event Barn up in Milton.

The espousing of that key message took about an hour and traversed a variety of topics (see part 1) but essentially amounted to a mediocre performance from a Donald Trump-cover band: screeching renditions from the America First catalog delivered with the eloquence of a fart.

While decrying local media for labeling them “outsiders,” both Gaetz and Greene seem to relish that status. The pair is quick to contrast their brand of Republicanism with that of fellow GOP lawmakers.

“We have a problem in congress and I know that you all are well aware of it. You see, we have a population of RINOs, right?” Greene told the crowd in Milton, later setting herself and Gaetz further still from there colleagues: “A lot of times, Matt and I, we are very few, we are in the minority in the way we vote, the way thing, the way we think congress should be operating.”

“Sometimes our colleagues will come up to us and say, ‘Marjorie, Matt, we think like you think, but gosh, our district just wouldn’t support us if we did that,’ and, you know, ‘how are you able to be so tough and so aggressive in all you do?’” Gaetz recounted later. “I tell’em, ‘You think I’m tough? Wait until you meet the people that I serve, my bosses.’”

Much Ado About Mandates

Much was said about COVID-19 vaccines, particularly about vaccine mandates and the candidates’ opposition to them.

“We have to restore the military members that have been kicked out, the military purge that’s happening over the COVID-19 mandate,” said Greene, who told the crowd that she had chosen to remain unvaccinated.

“More and more of our military are worried about being driven out. Whether its through mandates or whether it’s through this claim of extremism through our military,” Gaetz agreed.

The so-called liberal news media always makes for good material. Gaetz focused on the “outsider” comment, and then he and Greene also made a point of trying to make the case that regional newspapers the Pensacola News Journal and Northwest Florida Daily News had morphed from quaint mom-and-pop affairs to out-of-touch rags owned by some other-worldly mega-corporation bent on upending America’s greatness.

“Now, the Northwest Florida Daily News and the Pensacola News Journal are owned by a woke company, Gannet media,” Gaetz told the crowd.

Greene later returned to this theme, straining to pronounce the company’s name as if it were mouthful of consonants: “What’ are they called again? What’s their company? Gannet?”
“Gannet,” Gaetz replied.
“Gannet — that doesn’t represent this Northwest Florida crowd, not at all,” Greene said to the backdrop of sympathetic boos.

Alright, this is just odd. Gannet is a huge, old, behemoth of a media company and both Gaetz and Greene are obviously full-well aware of it, certainly to the point of being able to pronounce it. And it has owned the News Journal for, like, ever. And, further, Gannet’s not exactly known as a lefty organization.

Recently comedian Jimmy Kimmel made a joke about actor Will Smith slapping Rep. Greene, a reference to a recent occurrence at this year’s Oscars ceremony. Greene and Gaetz have made a pretty big deal out of this, equating the joke to advocating violence against the congresswoman, and they continued to do so in Milton.

“Jimmy Kimmel, when he said that, he calls it a joke, but it is a dogwhistle for violence against me. And there is a direct result,” Greene said, adding that the following day she made 11 “critical threat” reports to the capitol police.

Greene explained — joked? — that Southern moms will make a child “pick your switch” so she can “take you around the barn” and “wear your your backside red.” Gaetz laughed, waved to his mother in the crowd and said she had told him that if he let Biden get elected “she’d put tire tracks down my back.”

Really? I doubt it. That wouldn’t play well in Seaside. Funny joke, though.

Recently, both the U.S. congress and senate overwhelmingly passed a bill directing assistance to Ukraine as it defends itself against Russia. In fact, Gaetz and Greene were two of only three dissenting votes.

The representatives said that their opposition to the measure was not connected to their support for Ukraine, but rather a priority on home-front economics.

“It’s not wrong, it doesn’t make you a bad person to love our country first,” Gaetz said. “And then they say if you don’t vote for it you’re pro-Putin. Give me a break.”

Greene said that the current economic sanctions against Russia are not working, and that further sanctions would have too negative of consequences in the U.S.

“You see, more sanctions mean that it is going to cause real people to hurt,” Greene said, relating the sanctions to rising costs for commodities like fuel and fertilizer and predicting a food crisis: “People are going to be starving to death.”

“I voted no on that bill,” continued Greene, “because I’m not interested in hurting Americans, because Joe Biden is not tough enough to stop Putin from invading Ukraine.”

Gaetz took it a step further, wrapping up the issue of Ukraine with not only the Iran nuclear deal, but also, via some less-than-graceful gymnastics of logic, to the notion of irresponsibly endangering the regional military community.

“I believe that Joe Biden has gone to stop U.S. purchases of Russian oil to drive us into the arms of Iran so they can get back to the Iran nuclear deal,” Gaetz said. “They’re gonna say, ‘oh, now that we’ve put these sanctions in place, we have to go do business with Venezuela and we have to do business with Iran, when Iran got all that cash that Barack Obama sent over to them. That money ended up in the hands of militias and other groups that our neighbors, our fellow Northwest Floridians were having to go and confront in battle, so I don’t want to see a circumstance where we weaken our hand, I want to strengthen our hand.”

Apparently, other Republicans have been asking Gaetz and Greene to shut up about the January 6 , 2021 riots at the U.S. capitol. The pair routinely champions those that stormed the capitol — inside the barn, Gaetz downplayed participants as “unarmed grandmothers” — and that isn’t playing well for the party.

“The Republican leadership tell Marjorie and I, ‘you really need to stop talking about January 6, and we don’t want to see you guys going back to that jail, and we’re tired of you harassing that attorney general about these people with no charges. They say, ‘you know what? The polling on that is just not always great for us.’ Well, you know what? This isn’t about polling,” Gaetz said.

“I honestly don’t know who they’re polling,” Greene said. “People do care about these forgotten Americans who are locked up and rotting in the D.C. jail.”

Instead of dropping this issue, it appears Gaetz and Greene intend to turn up the dial.

“We want the investigation — what was the FBI’s role in January 6?” Greene said, teasing at the inside-job conspiracy theory.

With that underhanded, slow-pitch softball lobbed right over the plate, Gaetz gave it a good smack and took a victory lap around the bases in the form of a accusuggestionspiracy.

“Next time we the FBI in front of us, I might ask him why he tried to kidnap the governor of Michigan,” Gaetz dove headfirst into murky waters. “The FBI essentially concocted this scheme, they roped in a few dopes and then wanted to charge those people for terrorism and kidnapping and all those horrible crimes. And then you know what’s interesting, Marjorie? The head of the field office in Detroit, Michigan, who put together that whole corrupt operation, then moved to Washington D.C. field office in the weeks before January 6. How about that? How about that?”