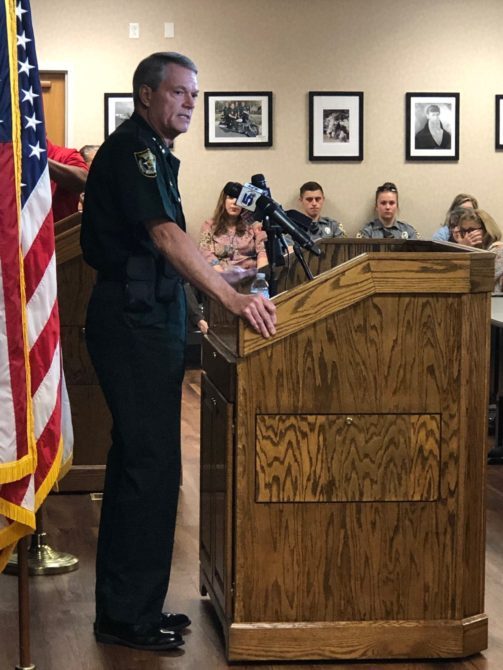 Escambia County Sheriff David Morgan called an “all hands” meeting this afternoon to respond to allegations made by woman who is serving a 25-year prison sentence for sex crimes involving her teenage daughter.

“It’s incumbent upon me as the head of this organization to put these rumors, innuendo, and propaganda to rest,” said the sheriff.

Leah Manning claimed in a May deposition that she had sexual relations with the sheriff and offered as proof that she had his cellphone number in her contacts on her phone and had named her dog after him. She also alleged there was a video of him half-dressed but had no idea who had the video.

The deposition was part of her daughters’ federal case against Morgan that asserts that pressure from his administration may have deterred Internal Affairs personnel from fully investigating their parents’ sex ring that involved several deputies.

Sheriff Morgan said that the investigation into the Mannings was conducted by the State Attorney’s Office, not his agency.

“You may ask why, sheriff, are you bringing that up,” he said. “Because the assertions and allegations have been made that the sheriff ran and/or manipulated the criminal case as well as the internal affairs investigation-that would be extremely difficult to me to do when I was not the head of the investigation.”

He said during the infancy of the case, investigators found Leah Manning’s phone had several numbers, including his official cellphone. He said some have incorrectly reported on Facebook that it was his personal cellphone, but it wasn’t, according to the sheriff. However, he wouldn’t been surprised if it had been.

“During the conduct of my campaigns for Escambia County sheriff, I routinely put my personal cell number on business cards and flyers,” said Morgan. “So for anyone in this county to have my cell phone would not be uncommon.”

He said he had his Intel department analyze the records of his official cellphone, personal cellphone and personal landline. The investigators found no contact with Manning. Sheriff Morgan said, “You would think that would put the issue to rest. Unfortunately it is not, so we continue again with this case.”

Morgan said that he doesn’t manage Internal Affairs Investigations because it would be inappropriate to do so since he is the final review in the process. He said that only once in his 11 years as sheriff has he disagreed with the findings of an IA report.

In response to a question about the alleged video, he said, “Do you really believe, especially in today’s environment, that if someone really had that sort of video, of not only me but any other elected official, that it would be held in confidence? Did someone have an immediate attack of integrity and decided : ‘Oh, I can’t delete that video. It might be embarrassing to someone?'”

We will have more on the press conference on Friday.