For years, Councilwoman Sherri Myers had tried to get Mayor Ashton Hayward to put sidewalks on Burgess Road. Her pleas have fallen on deaf ears. Unfortunately, the mayor rewards his friends and punishes those that challenge him. 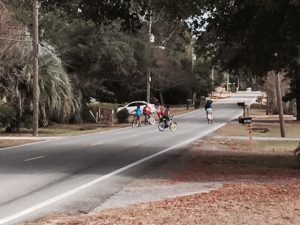 After reading Mayor Hayward’s viewpoint in the daily newspaper – “Fiscal discipline helps Pensacola rise,” Myers protested the mayor’s callous treatment of the children in the Burgess Road area in an email to City Administrator Eric Olson:

The Mayor presented a budget to the council which is a statement of his priorities. So, when I met with you and Mr. Barker, you both told me last week that the Mayor has no funds for Burgess Rd in his budget.

In meetings I had with you and Mr. Barker at the beginning of the year, I asked Mr. Barker where the funds were for Burgess Rd. sidewalks. Mr. Barker pointed out to me that there were $1.6 million in unallocated LOST funds.

Mr. Barker and you both knew that I was going to ask the council to allocate those funds to put much need sidewalks on Burgess Rd., so school kids would have a safe route to three public schools. You took the money that money and increased the cost of a high-end community center, one that isn’t even in the Bayview Master Plan.

Ashton Hayward said in a propaganda piece in the PNJ that his budget puts “needs” before “wants”. One only has to look at his budget, and know this is a lie. It is clear that Mayor Hayward does not consider safe walking conditions for school children a “need”.

It appears that time and time again the Mayor and you have shown a total disregard for the safety of children, especially those in poor and minority communities, such as the Tanyards and Burgess Rd. area.

You can rest assured that I intend to fight like hell for justice for kids and pedestrians that use Burgess Rd. and for the poor and underserved in the City of Pensacola. I am ready for this fight.

Note: Is the Bayview Community Center already $2.2 million over its original budget? Where is the mayor’s touted ‘fiscal discipline’?