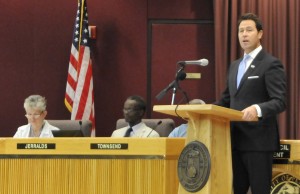 She describes the issue at the center of her recent lawsuit against Pensacola Mayor Ashton Hayward as “not too complicated.”

“The issue is very simple, it has a lot to do with the separation of powers,” said Pensacola City Councilwoman Sherri Myers. “The charter was very clear about what powers city council has—it is not ambiguous.”

The city councilwoman filed a lawsuit yesterday against the mayor. The suit addresses a memorandum Hayward issued last month which stated that council members could not directly communicate with city staff.

“In a nutshell, this is about the separation of powers,” Myers said a few hours after her suit was filed. “One branch can not interfere with the powers of the other—that’s illegal.”

Mayor Hayward issued a response this afternoon: “While I respect Councilwoman Myers, I disagree with her position and I am disappointed in her decision. I believe there are better uses of taxpayer resources and the court’s time.”

In the May 15 memorandum, Hayward instructed council members to go directly to his office with their questions or concerns, as well as public records requests. The memo cited “efficiency” and City Administrator Bill Reynolds subsequently told the council that their communications with staff could be viewed as politically intimidating.

“When you walk into a staff member’s office, immediately it’s a big deal,” Reynolds told the council in late May. “It can be intimidating to staff, and that’s why this prohibition is in place.”

Myers disagrees. She contends that the city charter allows for communication between council members and staff, and said such communication is necessary.

“If we don’t have the right to information—and information that’s not filtered—I don’t think we can really govern.”

Myers said that since the memorandum was issued, she has stopped trying to communicate with city staff— “basically, what we have is a gag order on city employees.”

“For example,” the councilwoman said, “I sent a simple email request to Mr. Garza about when two streets were scheduled to be resurfaced. His reply was that he could not talk to me.”

Myers said she had been going through Reynolds since that point, but would rather be getting her information directly from staff.