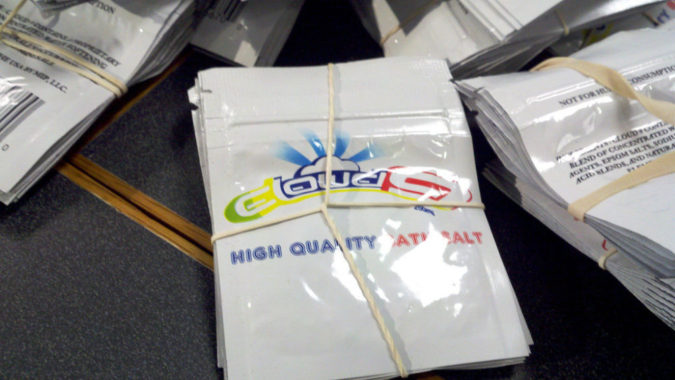 Now that Synthetic pot (Spice) has been taken off the market, the new high is synthetic cocaine (brand names: Cloud 9, Ivory Wave, Ocean, Charge +, White Lightening, Scarface, Hurricane Charlie, Red Dove and White Dove) that is being marketed as bath salts or plant feeder. It can be snorted, smoked or injected and mimics drugs like Ecstasy, Cocaine, or PCP. The DEA reports it gives users euphoria and extreme energy, but they’ll also appear agitated, suffer from hallucinations, or worse. It is priced under $50 and is sold in convenience stores, smoke shops, gas stations and online. The label says “not for human consumption.”

Like Spice, it doesn’t show up in drug tests.

Earlier this month, Louisiana Gov. Bobby Jindal used his emergency executive powers to ban six compounds commonly used in the manufacture of bath salts. In Panama City, the sheriff has asked retailers to not sell the product