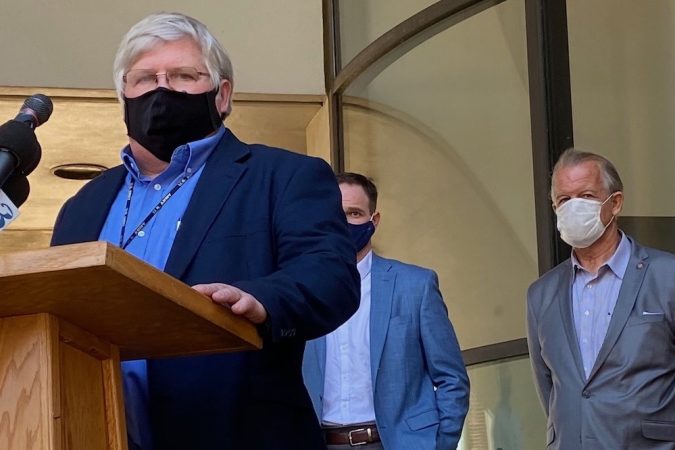 Local and regional elected officials met Wednesday with representatives from the Florida Department of Transportation in an effort to determine how best to ease the challenges facing commuters and businesses due to the currently offline Pensacola Bay bridge following damage sustained during Hurricane Sally.

“I’m grateful for the fact that they’re holding the line and want some answers,” said FDOT District Three Secretary Phillip Gainer, during a joint press conference outside Pensacola City Hall following the meeting.

During Hurricane Sally, unsecured barges belonging to Skanska, the company contracted to construct the newly built bay bridge, damaged several sections of the span. Currently, anyone wishing to travel between Pensacola and Gulf Breeze is faced with either a long-distance circumnavigation or getting ferried by private boaters making runs across the bay.

“It’s even just tough to describe what it’s done to this community and how it’s impacted us,” said Escambia County District 4 Commission Robert Bender.

Wednesday’s meeting between local officials and FDOT was described by Florida State Senator Doug Broxson, District 1, as a “very productive meeting,” but there were also allusions to tense moments.

“There was frank discussion,” said Pensacola Mayor Grover Robinson, who described the purpose of the meeting as an opportunity to identify “solutions” to the current predicament: “How do we make the best of a bad situation?”

Thus far, officials have pointed toward a six-month time estimate for bridge repairs. During that interim, Robinson has pushed the notion of a ferry service running between the city dock and Gulf Breeze.

Robinson said the city of Pensacola’s docks would soon be repaired from damage sustained during Hurricane Sally and ready to accommodate ferries, though Gulf Breeze still lacks a deep enough area for ferries to dock. FDOT has agreed to search for federal grants in order to fund the creation of a deep enough harbor in Gulf Breeze, which is expected to run around $450,000; no timeline was given for this effort.

Other efforts announced following Wednesday’s meeting, included the removal and addition of roadway signage to ensure drivers know the bay bridge is out of service, as well as possibly tweaking a recently added ECAT bus line transporting passengers between Gulf Breeze and Pensacola via the Garcon Point Bridge. In addition, Mayor Robinson said the city will be taking the “totally non-tradition and unconventional” step of opening up an area on Garden Street to be used by Gulf Breeze businesses wishing to temporarily set-up shop in downtown Pensacola: “We’re willing to get creative.”

“We are working every possible way we can to create the best possible environment for you,” Robinson said.

Another touted fruit of Wednesday’s meeting is better communication between the state and local communities impacted by the bridge outage. In addition to participating in regular meetings with local officials, FDOT will also keep the public informed about the status and progression of work on the bridge via a dedicated website.

“Give the public more confidence that we’re hitting our marks,” said Sen. Broxson.

The job of “hitting our marks” goes to Skanska, as well as two additional companies contracted to assist in repairs. Fluid communication with Skanska will also be essential in accurately updating the public and also informing work-around fixes during the interim.

State Rep. Alex Andrade, District 2, noted that thus far he considered the company to be “a very frustrating parter.”

“We are going to expect Skanska to step up and be responsive to this community,” Andrade said.

Sen. Broxson added that he thought Skanska was likely laying low because the company did not yet know how much financial liability it faced for its decision to leave barges out during Hurricane Sally and subsequently have them knock out the bridge and wash ashore all over the area: “My guess is it’s going to be pretty enormous.”

“We’re challenging them to be part of the conversation and I think their challenge is to limit their liability,” Broxson said.

Secretary Gainer said that FDOT was in daily contact with Skanska, but acknowledged that “confidence” in the company had been a part of the discussion during Wednesday’s meeting.

“All I can tell you is we meet with them daily,” Gainer said.