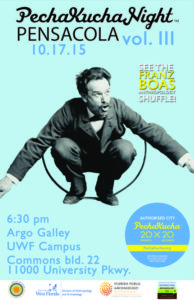 The third conference will be October 17th at 6:30pm at the UWF Argo Galley located on the University of West Florida main campus in Commons building 22. This conference will coincide with the Archaeological Institute of America’s International Archaeology Day. Anthropology incorporates natural science, social science, and humanistic approaches in the study of human beings. The University of West Florida Division of Anthropology & Archaeology has one of the most dynamic and active programs in the country. The sub-fields of anthropology include studying everything from underwater shipwrecks to the evolution of the human species.

About PechaKucha Pensacola: Similar to TED Talks, PechaKucha is a non-profit organization based out of Tokyo. Only 779 cities in the world have hosted these conferences. Pensacola became the 770th city to partner with PechaKucha this summer and is usually hosted at First City Art Center in Pensacola. The main concept of PechaKucha is to encourage thinking and ideas. It’s an organization for content, rather than profit.

About the Florida Public Archaeology Network: The Florida Public Archaeology Network is dedicated to the protection of cultural resources, both on land and underwater, and to involving the public in the study of their past. Regional centers around Florida serve as clearinghouses for information, institutions for learning and training and headquarters for public participation in archaeology.