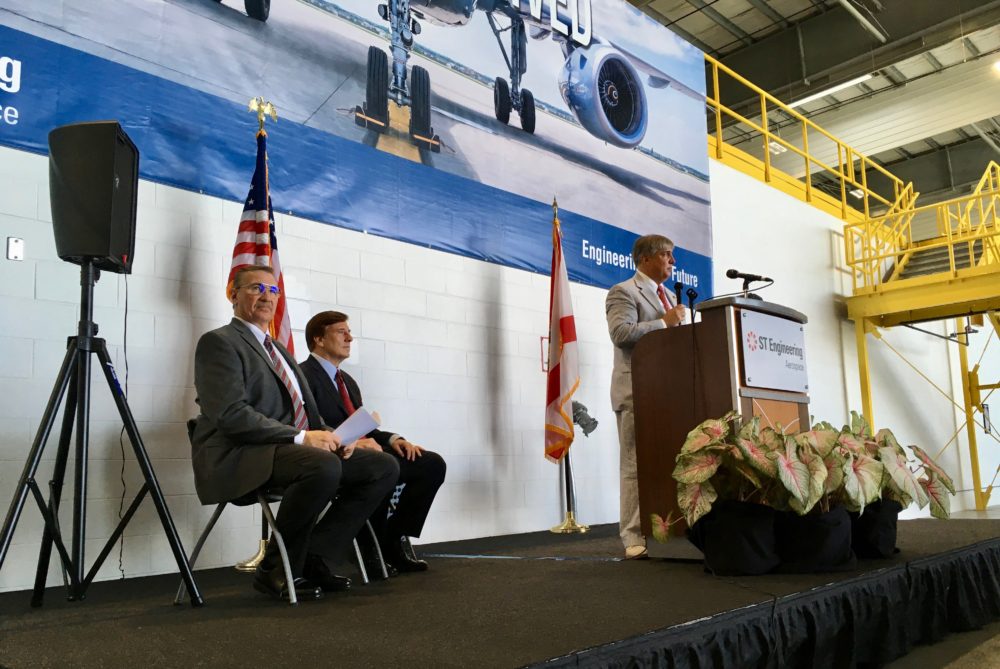 The U.S. Department of Commerce is awarding a $12.25 million grant to the city of Pensacola to be used toward furthering efforts to build out an aviation-maintenance campus near Pensacola International Airport. The grant, awarded by the department’s Economic Development Administration, will to used in establishing a maintenance training facility, which is expected to generate 400 jobs.

“It will be quite a thing to see,” said U.S. Assistant Secretary of Commerce for Economic Development Dr. John Fleming, after announcing the grant.

The grant announcement was made during an event inside an already online hangar — the first of four planned for the campus — where ST Engineering got down to business last year. Local officials are hoping the overall effort — part of a $210 million project, involving funding from a collection of public sources as well as a commitment from ST, that boasts both jobs and education angles, puts the region on the map when it comes to state-of-the-art aircraft maintenance, repair and overhaul (MRO).

“This is an awesome project for the city of Pensacola,” Mayor Grover Robinson said.

The $12.25 million EDA grant announced Thursday, together with about $36 million in matching funds from the local and state level, will be used to construct a 173,000 square-foot hangar, along with adjacent taxi ways. Construction is expected to commence in the latter part of 2020.

The new facility will be constructed to withstand 170-mph winds and will house maintenance operations as well as serve as a training facility; the new facility will also feature a 60,000 square-foot services center, where ST will locate space for engineers, management and other support-related offices.

“We’re gonna have a lot of opportunities for the folks in Northwest Florida,” said Bill Hafner, president of VT MAE, which oversees the Pensacola campus.

This new hangar will not be as large as the final two hangars planned for the Pensacola MRO campus, which will run north of 200,00 square-feet and be designed to facilitate larger aircraft.

“It’ll be over a quarter mile in length from one end to the other,” Hafner said, projecting that once the entire campus is built out, the operations will support 2,000 employees.

Hafner said that the training element of the Pensacola project is important not only as a way to ensure a supply of qualified employees, but also keep employees up to date on the latest technologies in an evolving field.

In addition to local public officials and members of the media, employees who currently work for ST also attended the grant-announcement Thursday, as it was held in the middle of their hangar and workspace. Pausing from their work on a pair of UPS planes, the workers gathered near the back of the space for the event.

As the event wrapped up, Mayor Robinson directed his comments to these workers before posing for a grip-and-grin photo with an enlarged novelty check.

“It is you that has proved Pensacola can do this,” Robinson told the workers. “We’re going to work hard to make sure there are jobs here for you to have.”