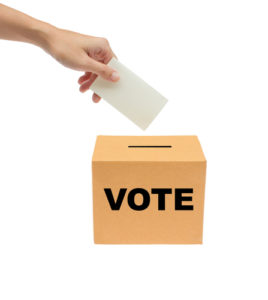 by Diane Mack, president of The Institute for Women in Politics of Northwest Florida

On April 24, 1951, voters went to the polls in the Democratic primary election for the Pensacola City Council (there were no Republican candidates). When the dust cleared from the primary, the run-off in May, and the general election in June, history had some entries for the record book:

41 candidates qualified to run for the ten council seats, including all incumbents.

For the first time since the initial council elections in 1874, two women ran–and won!

Eight of the ten incumbents were defeated.

Voting machines were used for the first time.

This was the last partisan election for city council. Two years later, by action of the Florida legislature, city elections were non-partisan.

The story of the 1951 elections and the aftermath that included the 1953 races are a fascinating episode and merit the remark, “It’s deja vu all over again.” But it’s a tale for another time, another place. Our story here is about….

The Women of the Pensacola City Council

Dorothy Dyson and Mary Anne Harrell were two of the nine candidates encouraged, endorsed, and promoted by a group in 1951 that called itself “Friends of Good Government.” Both were businesswomen. Mrs. Dyson was a partner in Dyson and Company General Building Contractors, and Ms. Harrell was the owner and operator of an independent insurance claims office. Each faced four male opponents, including the incumbent, in the primary; each advanced to the run-off and won, Mrs. Dyson being elected to the at-large seat for Ward 5 and Ms. Harrell to the Ward (District) 1 seat.

The faction who lost power in 1951 fought back in 1953 with an ugly campaign. Mrs. Dyson handily defeated her single challenger, but Ms. Harrell, who had six opponents in the non-partisan primary and managed to advance to a run-off, lost her re-election bid. Mrs. Dyson resigned her seat in October 1953 so that Dyson Construction could bid on future city projects.

It was 1981 before another woman was elected to the city council (Cynthia Russell, 1981-1983), but from that time to the present, except for the period May 2002 to January 2005, at least one council seat has been held by a woman. The longest serving councilwoman was Joyce Reese (1983-1996), who was also the first African-American woman elected to the body. The council came closest to gender parity during the 2009-2011 term when four seats were held by women. We are proud and honored to list here the roll of the fifteen women who have served Pensacola from 1951 to the present day:

Next year Pensacola City Council districts 1, 3, 5, and 7 will be on the ballot. The incumbents in 1, 3, and 5 are male. There are women in this community who could give these incumbents a run for their money. As of November 2016, the council will have only seven district seats (none at-large). Would the dynamics of a council consisting of five strong, capable, independent women and two men be significantly different? You bet!

Diane Mack will be a guest on “Pensacola Speaks” this afternoon. The show airs on News Talk 1370 WCOA from 5-6 p.m. To learn more about the IWP, visit their website.