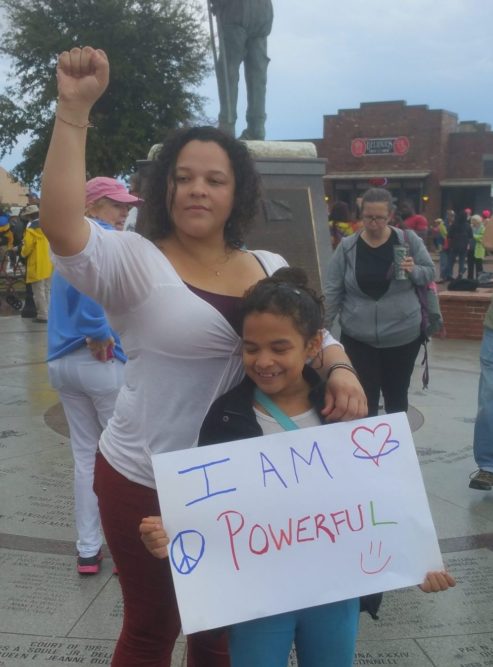 Nothing, not even torrential rain, can stop “Nasty Women” on a mission.

That phrase was a repeated theme throughout the Pensacola Women’s March on Saturday, Jan. 21, and a rallying cry embraced by determined women worldwide seeking change.

The originally disparaging comment made by Donald Trump toward Hillary Clinton during a Presidential Debate became a women’s rights rallying cry seen on buttons, t-shirts, bumper stickers and even a pageant-like banner.

Saturday’s march, scheduled for 10 a.m., was delayed due to a tornado advisory rain. The crowd that gathered at Plaza de Luna was asked to return at 11:30 to ensure participant safety.

However, the determined marchers were already drenched, so they opted to march anyway.

When they returned to Plaza de Luna, the heavy rain had abated, allowing march coordinator Janet Sallis to start the official program. She started by thanking her support team for the well-organized event, complete with an area for nursing mothers, put together in less than two weeks.

The idea originated when discussing the Women’s March on Washington with one of her friends, who said, “I wish we had one of those.” 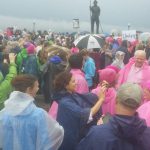 She encouraged the march participants to remain resilient, stating, “If the answer is no, you keep going! Build your resiliency muscle and bounce back!”

She also addressed the concerns of many, noting, “It is easy to get bogged down in hate and anger. I believe tomorrow can be better and I have the power to make it so!”

The global peaceful demonstrations showed solidarity of effort and a desire to protect both American women’s rights and a broad spectrum of human rights. The international support, from Tokyo, Japan to Barcelona, Spain, even reaching Auckland, New Zealand, has been overwhelming. One protest sign in Sydney, Australia, held a quote by Malala Yousafzai, the youngest Nobel Peace Prize Laureate, which read, “If one man can destroy everything, why can’t one girl change it?”

Claire Stewart, 26, proudly held her sign that read, “Women are strong as hell.” She felt it important to participate in the in the march, noting, “Women’s rights are human rights.”

Another  Pensacola protest sign read, “In our America, Women are in charge of their own bodies, science is real, black lives matter, diversity is celebrated, kindness is everything, and love is love.”

The Pensacola Women’s March included men and children, allies in support of their wives, sisters, daughters, mothers, and friends. March protestors brought signs that held resolute, powerful messages such as “I am no longer accepting things I cannot change,” “Hear Our Voice,” “Our Bodies, Our Minds, Our Power,” and “A Woman’s Place is in the Resistance.”

The official women’s March on Washington website requested that women refrain from political references, but there were many, in addition to pink hats fashioned with the ears of a pussycat in response to an objectifying, misogynistic comment revealed during the presidential campaign. The hats served as a symbol of unity for marchers around the globe, spurring an actual project to knit more than one million hats prior to the Women’s March on Washington.

Dawn Corrigan and Blythe Lee were present with both hats and posters. Corrigan stated, “We are here to have our voices heard.” 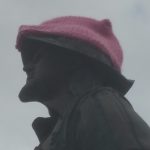 Countless other Pensacola marchers, the de Luna statue and even a four-month-old baby girl named Nora wore the hats. Her parents noted that they wanted to make sure she was ready for the future.

Along the route, a man dressed in all black wearing a ski mask covering half of his face held up a sign that said, “You Deserve Rape.” Police Officers standing next to him were asked to intervene, but they said it was his first amendment right. 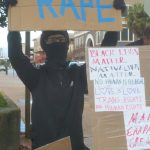 The sign’s message was a violation to many.

“He is why I am here!” noted one exasperated marcher. “That is not free speech, it is communicating a violent threat that too many of us have experienced!”

One male marcher had words with the protestor, taking the sign, but the police intervened prior to a physical altercation. To diffuse his message, two women covered his sign with their posters. Ironically, one of the messages on her sign read, “Make Empathy Great Again.”

After the crowd passed, the protestor went to another corner along the march route, only to have his message covered again.

The Pensacola Women’s March participants and millions around the world refused to sit by idly any longer.

They are united. Their voices will be heard.