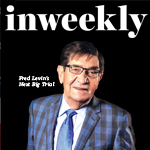 The man who took down Big Tobacco and recently was named the Trial Lawyer of the Year by the National Trial Lawyers Association credits the prayers of friends and family for the latest news on his stage four lung cancer.

“I’ve never been on to believe that prayer could be so significant, but I must’ve had, including several pastors—Pastor (Ted] Traylor, Pastor (Jim) Schettler—that have been praying for me,” said Fred Levin on “Pensacola Speaks” yesterday. “All of those people that have done that, that may have been what worked. Whatever it was, something’s working. I just hope it continues to have good news like this.”

Levin had flown back from Dana Farber Cancer Institute in Boston, where Dr. Bruce Johnson had seen him. Two weeks ago, he had a seizure in his office. When he was rushed to Shands in Gainesville, they discovered a brain tumor and spots on his lungs, liver and adrenal gland.

In Boston, he had a PET Scan on Wednesday to determine which of the nodes were cancerous.

“I went to bed the night before the PET scan figuring that I was eaten up with (cancer),” said Levin. “I mean, you had all these spots. I figured the damn PET scan would light up all of them.”

He added, “If that’s the case, they would’ve done nothing. They would’ve just said, ‘Go home and enjoy yourself as much as you can.’ That’s what I was expecting. I mean, I really was.”

Only one node on his lung turned out to be cancerous. Levin said he will return to Dana Farber next week to have it removed.

He said that he feels blessed and is optimistic about the future.

“I really feel like I’ve had a incredible life and I hope it keeps going. Listen, I don’t want to get off this merry-go-round or whatever it is,” Levin said.

He added, “Financially, I don’t have a problem. Career-wise, I just received trial lawyer of the year. I mean, I got every award that could be given. Family-wise, I’ve got just four fabulous children who love their dad. Just everything. Everything has been great. All of a sudden, like I say, I hit this bump in the road, and then the bump hopefully may not be as bad as expected.”